The sports hall
The sports hall is situated within the area of the holiday resort. The hall is available to the resort’s guests and to everybody who is willing to...
12-01-2015 ·
Lake Gardno (Grodno)
Home / Discover / Nature / Lakes 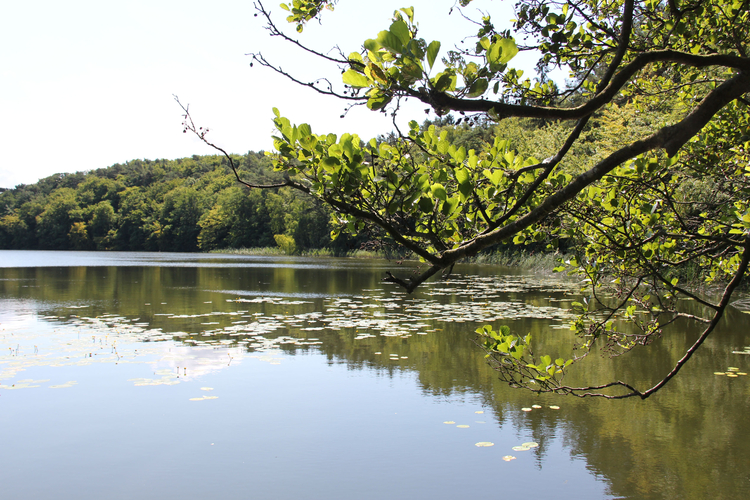 Lake Gardno, also known as Lake Grodno from a nearby town of this name, is a charming mid-forest body of water. It has a very interesting and characteristic shape of a seven-armed star. It is a closed lake of a glacial origin. It belongs to the class of ground moraine lakes, which results in a highly developed shoreline and numerous depths up to 7 metres. Gardno has the area of 2.78 ha and is located at the height of 16.9 m above sea level, thanks to which it is the highest located lake on the Wolin Island. In the middle of the lake, there is a small isle with an arbour and canoe harbour.

The lake is surrounded by 100-year-old beeches and oaks. The western shore neighbours on the Zygmunt Czubiński strict protection zone, which mainly protects the old-growth beech forest and a unique Wolin orchid beech forest. The lake is inhabited by crucian carps, roaches, breams, and bleaks, but, due to its location within the area of the Wolin National Park, fishing in the lake is forbidden.

Before the Second World War, it was well-known place for strolling. There were bowers, bridges, and a café. Everybody could admire the charming Lake Gardno. Unfortunately, Herman Goering decided to establish his hunting residence there, which resulted in closing the area. Later on, the place got into the hands of Bolesław Bierut, and then it became a property of the Council of the Ministers. An exclusive holiday resort for the chosen was established by the lake. At present, Lake Gardno is available to everybody again. There are open-access holiday resorts there, as well as an educational centre of the Wolin National Park.

Archaeologists found numerous figurines of a four-faced god. Its name was Światowid. Near the lake a pagan temple in honour of Światowid was erected. It is why the second name of the lake is “Światowid’s Pupil”. Other legends tell about Steńka of Kamień Pomorski. She was a servant at the castellan’s court. When one of rulers seduced her and took advantage of her, she murdered him and set fire to the court buildings. She ran away on Lake Gardno and joined pirates. Using the then existing canal that connected the lake with the Baltic Sea, they organized pillaging expeditions for several years. Eventually, Steńka, a female pirate, fell in a trap. Realizing that she would not escape, she threw all treasures she looted into the water and she threw herself into the depths of the lake.

More on the topic:
Geolocation
Search nearby
Lake Gardno (Grodno)
COMMENTS
Sign in to leave a comment.