The City Fortifications
The city fortifications were built at the turn of the 14th and the 15th century. To this day only fragments thereof have been preserved. They are m...
23-05-2015 ·
The Castle
Świdwin
Home / Discover / Pomorze heritage / Castles 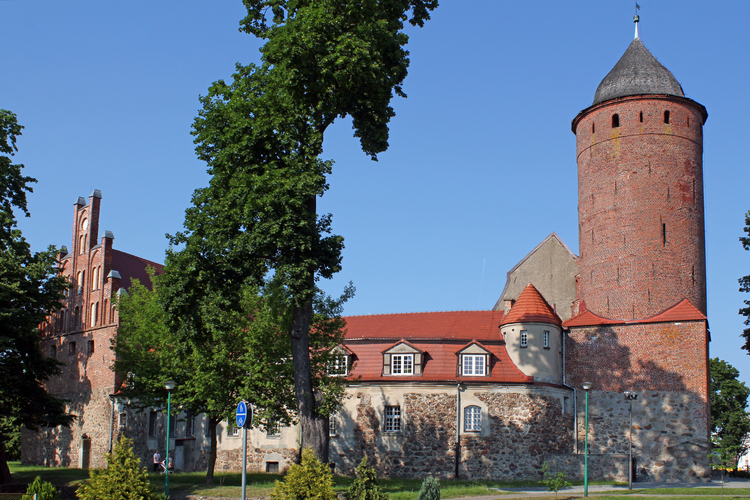 The castle in Świdwin is situated in the west of the town. When you are out of the train station, head for the city centre and go through Brama Kamienna [the Stone Gate]. A little farther, behind the town hall, you will see the impressive construction.

First mentions of the castle in Świdwin go back to the 1310s. Nobody knows, however, when exactly the castle was built. One thing we know for sure is that it had been built before the town obtained municipal rights (before 1296). The construction of the castle was initiated by Prince Przybysław IV. According to the oldest records, the original castle looked different than it does today. The castle courtyard was enclosed by walls which were 12-metre tall. A moat, bascule bridge, extra fence and a tower later transformed into a fortified tower made up the fortification of the castle. The residential part was initially situated in the north wing but, as the number of occupants continued to grow, the remaining wings were being expanded. Over the centuries the castle had many masters. It was inhabited by the family of Wedel, the Teutonic Knights, the rulers of Brandenburg and the Order of Malta. The Wedel family expanded the castle by adding the south wing. Then, the town of Świdwin was enclosed by defensive walls, and a church was built on the market square. The castle was later bought by the Teutonic Order which was growing in power and expanding its authority by buying out local lands and properties. At the time, the north wing was expanded and a fortified tower with loopholes and an observation deck at the height of 25m was built. The municipal walls were provided with embrasures, observation towers and four additional fortified towers. In 1455 the town along with the castle was taken over by Frederick II Hohenzollern, the Elector of Brandenburg. In 1540 the town of Świdwin was seized by the Knights of Malta. The new owners reconstructed the castle. The fortifications were not so important any more, therefore, the moat was filled in and some of the defensive structures were destroyed. From that moment on, the castle was supposed to serve as an elegant building. The Knights of Malta resided in Świdwin and in the castle until 1810. In recognition of their contribution to the development of the town, there are family crests of three commanders of the Knights of Malta above the entrance gate to the castle. After the last of the commanders left the castle, it changed hands to secular ones. In the nineteenth century the castle housed a few public institutions. The south wing served as a seat for a court, the east part held a tax and cadastre office, the west part served as a prison and the north wing housed an armoury. Unfortunately, the building had not been renovated for a very long time which meant that its condition deteriorated. During World War I 202 of Świdwin’s population died. To commemorate the fallen their names were engraved on a stone memorial by the entrance to the castle. During World War II the castle did not suffer any damage. It also held its ground during the destruction of the town caused by the Soviet troops. In the 1950s the north wing was gutted by a fire. It was then that the municipal authorities decided to carry out major renovation of the building. The works took six years. During the reconstruction of the north part, its Teutonic character was restored. Fragments of defensive walls from the thirteenth century were exposed. After the renovation, the entire building was intended for a cultural centre. The building has an auditorium, which can house 200 people, a cinema, exhibition rooms, a knight room intended for smaller events and a municipal public library. Next to the castle’s library there is the entrance to the fortified tower. To be able to enjoy a beautiful view, one has to climb 69 steps in a narrow corridor. During a visit at the castle, one should stop by the exhibition room where, alongside the works of local artists, there is the work of Franciszek Starowieyski – the creator of the so-called theatre of drawing. His mural is entitled ‘The Dispute over Contemporary Art’. The castle gate houses a Tourist Information Centre. The castle can be visited only with a guide. The visitors may access the north wing which seats an exhibition room, a knight room and an auditorium. Visitors may access the fortified tower during the opening hours of the cultural centre. Regular tickets to the castle are PLN 5, concession tickets are PLN 3. For the fortified tower, regular tickets are PLN 2.50 and concession tickets are PLN 2.