The sports hall
The sports hall is situated within the area of the holiday resort. The hall is available to the resort’s guests and to everybody who is willing to...
12-01-2015 ·
Brama Wysoka [the High Gate]
Gryfice
Home / Discover / Pomorze heritage / Fortifications and military structures / Town walls 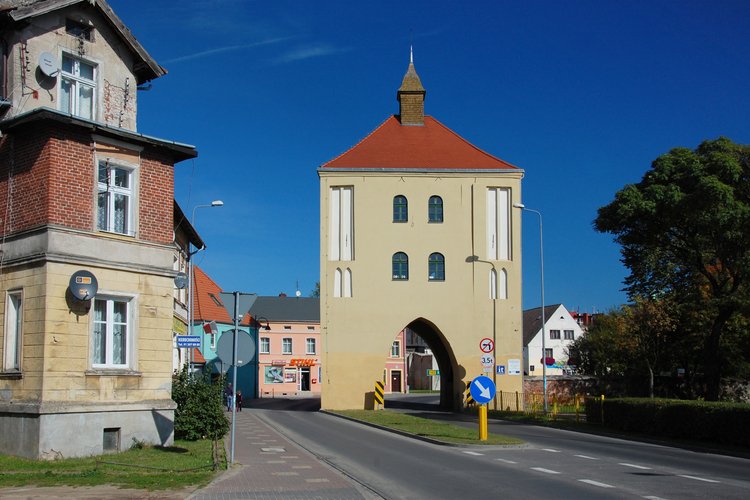 Brama Wysoka is located in the southern part of the Old Town in Gryfice at Wysoka Brama Street, near Księcia Warcisława III Roundabout.

Brama Wysoka is a remnant of the ramparts once surrounding Gryfice. Due to the location of the gate, it was also called the Kamień, Nowogard or Szczecin one. There was as early as in 1300 the first building for the same purpose in place of the present gate which was started to be built in the fifteenth century. Brama Wysoka is one of three former entrances to Gryfice. It owes its name to the high and slender profile. Until the seventeenth century, the gate had been connected by a drawbridge with the bastion located in the foreground.

Brama Wysoka is a three-storey building on a rectangular plan made of brickwork in a monk bond. The fire of 1658 caused that the building was reduced to the now preserved height. Despite that fact, the name was not changed. The reduced body is topped with a hipped roof with an inscription. Later on, the loopholes, which were initially on each floor, were replaced with wider windows. The ogival gate opening is covered with a wooden ceiling. The guide of the grating blocking the passage was placed atypically - inside the gate building. The elevation seen from the town draws attention to its brick frieze and the blinds. During the whole period of its glory, the gate was not only a means of defence, but it was also a point of duty collection. In the late eighteenth and early nineteenth century, even collectors' lodges were added, which have not survived to our times.

Currently, the gate houses the Tourist Information Centre and the Museum and Gallery 'Brama'. The monuments connected with the history of Gryfice are exhibited there. These are documents, objects of everyday use, souvenirs, geological and military collections.

More info: gryfice.eu/it/, gdk-art.net/muzeum.php
More on the topic:
Geolocation
Search nearby
Brama Wysoka [the High Gate]
COMMENTS
Sign in to leave a comment.