The City Park
The City Park was created at the end of the 19th and the beginning of the 20th century. It stretches along the northern shore of Trzesiecko Lake, a...
29-04-2015 ·
Brama Słupska [the Słupsk Gate]
Sławno
Home / Discover / Pomorze heritage / Fortifications and military structures / Town walls 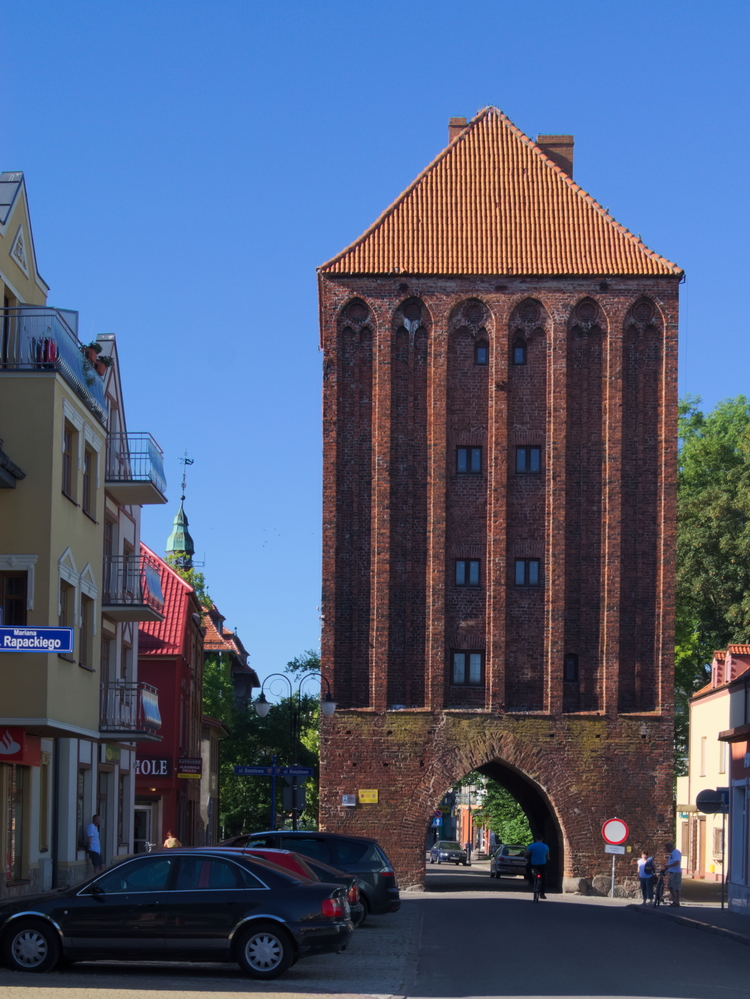 Brama Słupska [the Słupsk Gate] is located in the very centre of Sławno, in the northern part of the Old Town, at the intersection of Marii Curie-Skłodowskiej Street] and Basztowa Street, near the bridge over the Moszczenica River. To get to the Slupsk gate, pull off the ring road towards the centre while driving from Gdańsk, and continue along the road towards Darłowo. On arriving at the intersection of Gdańska Street and Marii Curie-Skłodowskiej Street as well as  1. Pułku Ułanów Street], You will see the Gate on your left. There You can find a characteristic monumental building of the Municipal Council.

The building was mentioned for the first time in 1458. Sławno had three gates. Two of them - the Koszalin and Słupsk ones survived to this day. The names of the nearby streets were derived from the names of  the gates, so  Słupska Street (now - Marii Curie-Skłodowskiej Street) used to run near the Słupsk Gate. The Szczecin - Gdańsk main trade route ran through both gates. On the map of Pomerania by E. Lubinus dated 1618, on the edges of which panoramas of selected Pomeranian cities were placed, there is also Sławno. You can see there the original appearance of the gate, which towers over the town in the western part of the panorama presented . The gate is one of the few relics of the old fortifications of the city.

It is a freestanding building, built in the Gothic style of solid ceramic brick, in Monk bond, on a square-like plan. Foundations are formed by field stoned. The gate is a four-storey one. There is a crossing with a ogival arch in the bottom storey. The gate is now covered with a hipped roof. It was originally a gabled roof. The northern and southern elevation is decorated with six elongated, slender blinds with ogival arches at the ends. Each blind is divided into two ogival windows with circular rosettes above them. The eastern elevation has three blinds, and the western one - two blinds. There used to be embrasures in the elevations of the gates, but turned into window openings.

In the eighteenth century, the walls and town gates were gradually losing its importance. They ceased to play a military role, so the fate of the town's fortifications was quite complex. In the eighteenth century, the gate was adapted to the needs of the local military garrison. There used to be military workshops on that place in 1816, and, later, a warehouse. After World War II, in the late 1950s and 1960s, the gate was in the hands of Związek Harcerstwa Polskiego [the Polish Scouting and Guiding Association]. In the 1980s, it was briefly inhabited, and turned into the seat of Stowarzyszenie Miast Partnerskich Sławno - Rinteln [the Twin Cities Sławno - Rinteln Association] in the 1990s. Currently, the gate is not used. So far, maintenance of the facility in good condition has been a challenge for its owners. This 'witness of history' must be closely watching locals, who, in turn, observe  this Gothic building curiously.

: Brama Koszalińska [The Koszalin Gate]
Search nearby
Brama Słupska [the Słupsk Gate]
COMMENTS
Sign in to leave a comment.