The Mother of God Queen of Poland church
Bielice are a small mediaeval oval village. It was first mentioned in 1235, in a document of Warcisław Świętoborzyc, transferring Beliz to a k...
08-04-2015 ·

Wały Chrobrego [Bolesław Chrobry’s Embankments]
Wały Chrobrego (formerly Hakenterrasse) were built in place of the former Leopold’s Fort, which was torn down in the second half of the 19th centur...
18-05-2015 ·

The Defensive Walls
The walls were built most likely in the first half of the 14th century. They were built from Gothic brick in Wendish bond and fundaments made of fi...
29-04-2015 ·

The Orlik playing field
The playing field was built as a part of the “Moje Boisko - Orlik 2012” project. Orlik consists of two playing fields which can be used to play vol...
20-02-2015 ·

SZCZECIN Marina Hotels
They are fully equipped with mooring spaces and can provide comfortable ways for yachtsmen to spend their leisure time, as well as entertainment. T...
07-04-2015 ·
The remains of the town walls
Home / Discover / Pomorze heritage / Fortifications and military structures / Town walls 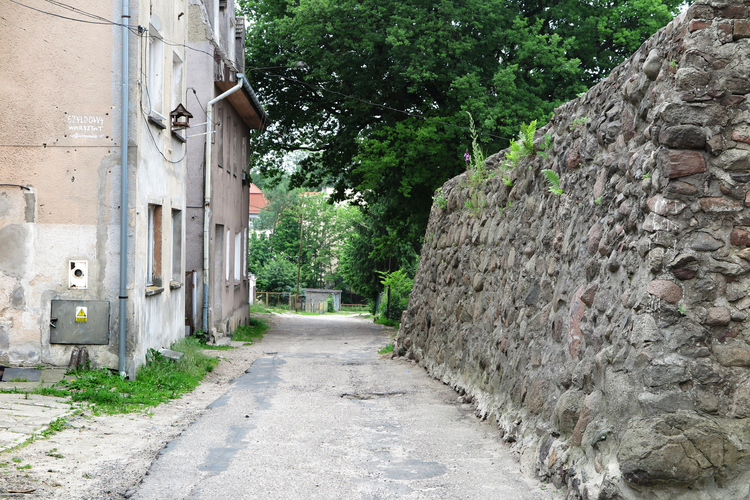 One of the elements of medieval buildings of Drawsko Pomorskie, preserved to our days, are the remains of fortifications. They were built of stone and brick, and construction works started at the beginning of the fourteenth century.  The walls surrounded tightly the then entire city. Three stone gateways led to the town: Nowa [the New one ] from the north (erected at the latest, because in the mid-seventeenth century.), Wysoka [the High one] from the west, and Niska [the Low one] from the south. In the corners of the walls, four keeps (probably on a square plan) were erected; and, along the perimeter, walls were also strengthened with donjons. There were six of them from the northern side, twelve - from the eastern side, probably eight - from the southern side; and a string of eleven or twelve - from the western side. The town was additionally fortified by embankments and moats, to which water was supplied from the Drawa River. While building the walls in the fourteenth century, they dug the canal of the Drawa that has survived to this day and water still flows there. At the end of the eighteenth century, the town authorities decided that defensive walls would be gradually dismantled. This process continued throughout the nineteenth century. In 1916, a project of reconstruction and restoration of the preserved fragments of the walls was made, the aim of which was to protect existing structure, fill in holes and construction of wooden defence porches; but it has not been realised so far for unknown reasons.

To this day, out of the 1,720 metres of medieval fortifications of the city only two fragments have survived. On Cmentarna Street, there is a fragment of the length of approx. 10 metres and the height of 2 metres, made of brick and stone. The second fragment is on the courtyard of the elementary school (from the Drawa River) on 13 Obrońców Westerplatte Street, made of stone blocks of the length of approx. 15 metres. Both pieces are labelled as historic monuments, and also information boards have been placed next to the walls with a detailed description and drawings depicting the original appearance.

: Historical urban plan
Search nearby
The remains of the town walls
COMMENTS
Sign in to leave a comment.