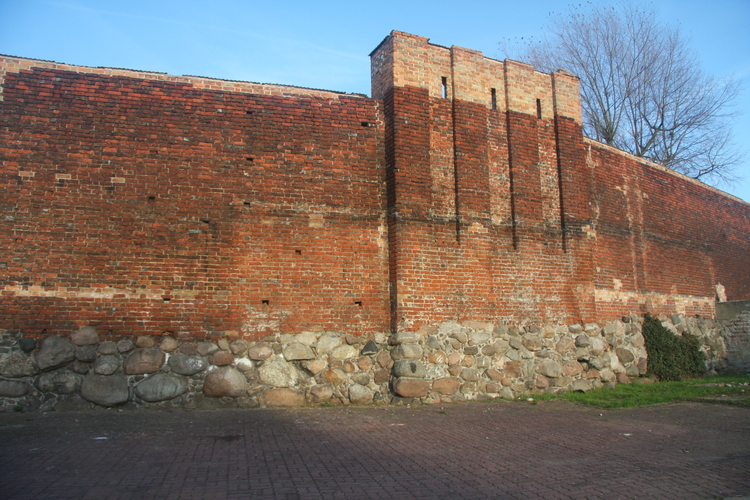 The town walls surround the old town along Matejki Street. The most imposing part is located near the Hosso mall and on the Liśnica River near a High School.

The walls were built most likely in the first half of the 14th century. They were built from Gothic brick in Wendish bond and fundaments made of field stones. The wall is 100 cm wide at its base and its average height amounts to 8 m. It used to be reinforced with 25 half-shell towers (open from the inside) placed every 23 metres. The initial appearance of the defensive walls can be seen on the Lubinus’s Map from 1618, shown in the City Hall of Białogard. The defensive walls circled the town and used to be the protection against potential aggressors. The town could be entered through two gates: Brama Wysoka [the High Gate] preserved up to this day (from Połczyn, Grottgera Street) and already non-existent Brama Młyńska [Mill Gate] (at the confluence of Staromiejska and Młynarska Street). It was also possible to get into the town through small gates located in five places of the walls (Furta Wodna [the Water Gate], Furta Księża [the Priest’s Gate], Furta Srebrna [the Silver Gate], Furta Zamkowa [The Castle Gate], and Furta Ogrodowa [the Garden Gate]). Nowadays, one can see just the fragments of the defensive walls. According to tradition, the walls were demolished in connection with two epidemics of cholera that hit the town in 1853 and 1856. The cause of the plagues was identified with pestilential air closed in the dense urban arrangement within the walls. The Mill Gate was pulled down in 1794. Up to the present day only the High Gate has survived, which appearance from the gable side differs from the initial one. There also exist partially restored doors of the office on Siemiradzkiego Street. By the doors, there are so-called “witches’ stairs”, whose name – according to a legend – derives from a tower that used to be located there, in which women accused of sorcery awaited their trial. In the years 1994-1995, the most fragments of the existing walls were restored on the initiative of the Provincial Historic Preservation Officer.