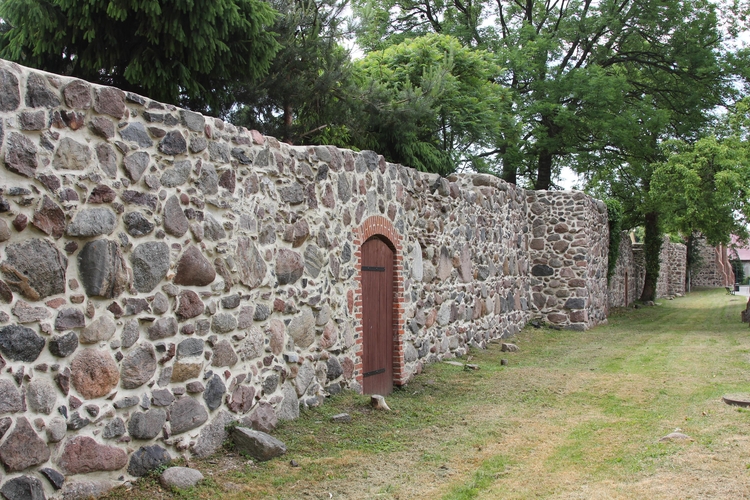 Despite its stormy past, numerous fires and wars, in Trzcińsko-Zdrój the line of the town fortifications remains quite impressive. The fortifications were built in 14th-15th century and they are made of fieldstone and brick. Some time ago the fortifications had 30 shooting towers, they were surrounded by a moat and an embankment – both were destroyed in the 19th century.

Five lupine towers, twenty rectangular towers and two towers – Prochowa and Bociana, as well as two gates – Myśliborska and Chojeńska (there were three, but Strzeszowska Gate did not endure) exist up until now.

Myśliborska Gate was built in the 14th century and it was 20 high long. It constituted the most important element of the town defence. The bottom part of the structure was made of granite blocks and the upper – of brick. It is a tower gate created on the plan of a rectangle. The structure is equipped with an iron grating which replaced a wooden grating. In the 16th century octagonal superstructures were created from which it was possible to monitor the surroundings. There are also shooting apertures in the gate. The name of the gate comes from its location in the wall – it is directed towards Myślibórz.

Chojeńska Gate was built in the 14th century and it was 18 m high. In the 15th century a gateway was also built which was later destroyed in the 19th century. As in the case of Myśliorska Gate, the lower part of Chojeńska Gate was made of fieldstone and the upper – of brick. This gate also had an iron grating which in the past was closed for the night. In the 16th century octagonal superstructures were built which allowed monitoring of the area. Ladders were used to move between different floors. There was a permanent team working at the gate, as well as equipment and food supplies. Also in this case the name is related to the direction towards which it was built.

Prochowa Tower was created in the 15th century by the closing of a semi-circular shed. The tower built on the plan of a circle was probably used to store gunpowder. The lower part of the structure was made of stone, and the upper – of brick. In the tower shooting apertures are visible and the structure has a defensive porch finished with a wall without blanks.

Town fortifications of Trzcińsko-Zdrój were entered on the list of monuments in November 1963.