Tourist road train trips
Cyrus Tours offers trips in an Italian road train around the seaside resort. It is an excellent opportunity to get to know the history of the town...
12-01-2015 ·
Defensive walls
Home / Discover / Pomorze heritage / Fortifications and military structures / Town walls 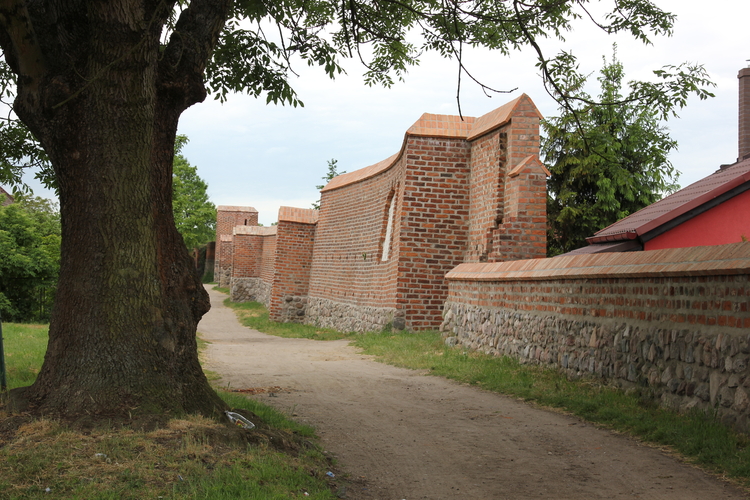 Mieszkowice is situated 98 km from Szczecin and 21 km behind Chojno. In order to get there we need to drive national road no. 31.

The first references about Mieszkowice reaches back to 1295. The beginnings of the town should be sought in the settlement from the 11th-12th century which according to a legend was established by Mieszko I. At the end of 13th century Mieszkowice was granted municipal rights and about 1300 it was surrounded by defensive walls.

The stone wall was built at a height of 7m. The lower part of the fortifications was made of erratic boulders, while bricks were used to build the upper part. The defensive wall was expanded in the 17th century. Up until now 14 lupines lookouts and 12 rectangular lookouts endured – including the Prochowa Tower from the 15th century.

Oval walls surround almost the entire town, excluding placed in which some time ago there were gates. The wall is now only 4-5 meters high on average. While the first four meters are mainly stone. The lower part made of granite was supposed to ensure the durability of the structure, resistant to undermining and ramming, it made it difficult for invaders to conquer the town.

The upper brick part of the wall has different layouts. In some fragments the Vendian system was used – stretchers and a head, and in some the Polish system – a stretcher and a head. Sometime the brick layout is inconsistent which indicates subsequent repairs of the fortifications.

Every 30-40 meters there were lookouts established in the walls. The structures do not have walls from the side of the town, therefore it is possible to see three-storey interiors. The lookouts were significantly extended towards the town – for above approx. 1.5 m. we will find medieval shooting apertures. They were perfect to shoot using both crossbows and bows. Their height allowed the defence of the moat. In the semi-circular towers there are no stairs, while in the rectangular ones there are narrow brick stairs on the left. The most precious structure is the 15th century Gunpowder Tower, which has a blended peak and a gabled roof.

Today the major part of the walls is significantly destroyed and along the wall a promenade was created.

More info: www.mieszkowice.pl
More on the topic:
Geolocation
Search nearby
Defensive walls
COMMENTS
Sign in to leave a comment.