The City Park
The City Park was created at the end of the 19th and the beginning of the 20th century. It stretches along the northern shore of Trzesiecko Lake, a...
29-04-2015 ·
The Town Fortifications
Home / Discover / Pomorze heritage / Fortifications and military structures / Town walls 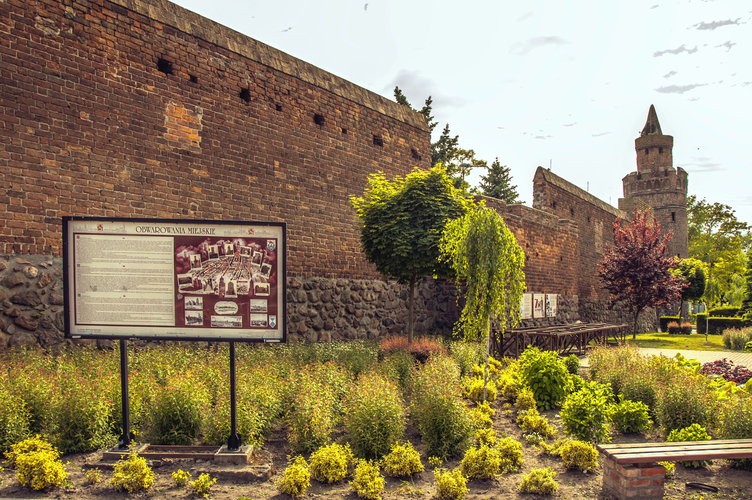 Due to the condition in which the defensive walls have been preserved, Pyrzyce can be easily

called Polish Carcassonne. The first mention concerning the fortifications of Pyrzyce can be

found in the sources from 1279. Most likely the 13th century is the period in which the lower,

stone part was built. Because of the development of siege techniques, the walls were

heightened to 7-9 metres in the 15th century. The superstructure was made of ceramic brick.

After the reconstruction, the total length of the fortifications of Pyrzyce exceeded 2

equipped with platforms and connected with each other by wooden galleries. Additional

protection was provided by earthworks, a moat, mill ponds, and two lakes. Due to the

development of firearm, at the turn of the 15th and the 16th century it was necessary to

protruding gatehouses and turn the key half-open posts into taller towers. Already in the 17th

century, in the face of ongoing development of firearm, the fortifications of Pyrzyce lost their

significance. The towers were turned into storehouses or houses for the poorest. In 1750, a

part of the earthworks was levelled, and the rest was turned into a tree-lined promenade in the

years 1830-45. Shorty thereafter, the moats were filled in, which provided the space for

gardens. The last time the walls of Pyrzyce have been stormed in 1945 by the Red Army.

However, due to weak resistance of Nazi defenders, they were not severely damaged. In the

notable are the following:

Street) section of the walls.

Beauty’s Tower]. It was adapted from an already existing semi-circular lookout post in the

years 1440-1470. It defended a small gate located nearby and leading to Stare Pyrzyce. The

tower was damaged during the fights of 1945.

built in the mid-14th century in the south-eastern corner of the town. The tower has two

shooting levels. It was named after an already non-existent monastery. The tower was

- Baszta Pijacka [the Drunkard’s Tower]. It was built in the early 16th century on a field stone

foundation. The upper parts were built in brick arranged in a Wendish bond. In addition, the

tower served as a sobering-up shelter. An oriel with a latrine has been preserved in the tower’s

a half-open lookout post in the years 1470-1480. It was used as a gunpowder and ammunition

- Baszta Wysoka [the High Tower], also called Baszta Lodowa [the Ice Tower]. It was built in

two stages. It was at the same time a watchtower and a prison, a later it served as a store of ice

sheet and a meat cold store.

crowned with a conical cupola. In the 19th century, due to a landslip, it became a “leaning

tower” of Pyrzyce. The deviation from the vertical in the upper part of the tower amounts to

the town, by a road leading to Banie and Myślibórz. It originally had three storeys, two more

floors were added in the mid-15th century and in the first half of the 16th century.

- the ruins of Brama Szczecińska [the Szczecin Gate]. In the heyday of the fortifications of

Pyrzyce, it was the main entrance to the town from Szczecin and Stargard. The gate was built

in three stages. Already in the 15th century it has six floors and was topped with a conical

cupola. During the fights in 1945, it was destroyed from the top to the first floor. After the

disrepair that is not to be rebuilt.

: The area of the Old Town

: The St Otto Park And Well

: The St Otto Park And Well
Search nearby
The Town Fortifications
COMMENTS
Sign in to leave a comment.