The City Park
The City Park was created at the end of the 19th and the beginning of the 20th century. It stretches along the northern shore of Trzesiecko Lake, a...
29-04-2015 ·
The City Fortifications
Home / Discover / Pomorze heritage / Fortifications and military structures / Town walls 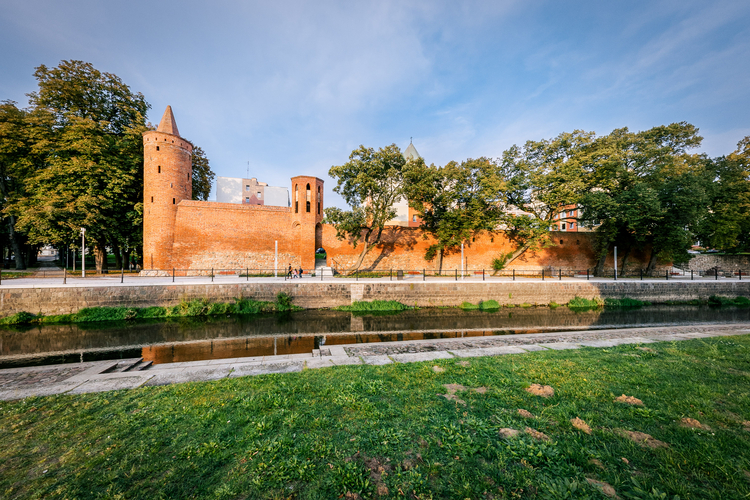 A part of the city fortifications is located on banks of the Ina River. They consist of Baszta Prochowa [the Gunpowder Tower] and Baszta Mennicza [the Mint Tower]. A next part of the walls is situated next to Gymnasium No 1. Yet another part was preserved on Grunwaldzka Street and contains Brama Wolińska [the Wolin Gate] as well as on 1 Barnima Street. A section of a wall is also situated on the Struga Goleniowska River.

The city fortifications were built at the turn of the 14th and the 15th century. To this day only fragments thereof have been preserved. They are made of stone and brick. The first fragments of the fortifications were already erected in 1268. Initially, the city walls consisted of several brick lookout points, towers, and four gates: Brama Wolińska, Brama Szczecińska [the Szczecin Gate], Brama Stargardzka [the Stargard Gate], and Brama Młyńska [the Mill Gate]. In the mid-14th and the 15th century, the walls were extended – they were heightened and the gates were enlarged. The wall in the port contains three water gates. Also three towers were built: Baszta Mennicza [the Mint Tower], Baszta Mnisia [the Monk’s Tower], and Baszta Żeglarska [the Sailor’s Tower]. Currently, only a part of walls can be seen – other fragments were destroyed, and a part of the walls was pulled down in the 19th century. In 1889, the city authorities decided to preserve a part of defensive walls and three buildings: Brama Wolińska, Baszta Więzienna [the Prison Tower], and Baszta Mennicza. On a little tower at the end of the wall by Brama Wolińska, there is a date commemorating this famous decision of the city authorities. A part of the walls was damaged during the Second World War. The walls, however, have been restored and are now one of the most interesting tourist attractions of Goleniów.