Water tower
The water tower was constructed in 1935 within area of a water intake. The water was drawn with the use of a deep-well pump. The tower was used to...
22-04-2015 ·
Collection of glacial erratics in Kołbacz
Home / Discover / Pomorze heritage / Historic Monuments 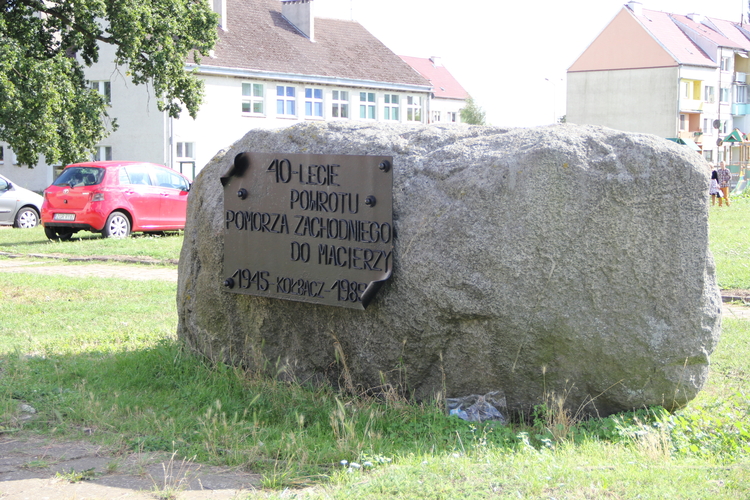 The collection of glacial erratics can be found in Kołbacz, in Stare Czarnowo Municipality, in Gryfino District. This place is located by the road No.120, approx. 3,5 km west from Miedwie Lake, and approx. 2 km east from Puszcza Bukowa [Beech Forest]. It is situated on the Płonia River. In the centre a green route called “Szlak im. Bolesława Czwójdzińskiego” starts. The erratics are located near the Converses’ House and the palace, in which Zakład Doświadczalny Instytutu Zootechniki Państwowego Instytutu Badawczego [Experimental Unit of the Zoo-technology Research Institute] has its seat.

Glacial erratics in Kołbacz, were collected from the local fields. It was done by the Experimental Unit of the Zoo-technology Research Institute, whose main task was to make academic research and to raise and breed cattle, swine, and sheep. Władysław Mazurkiewicz, who had been the manager of this institution for many years, was also a great fan of Kołbacz. He initiated transport of the biggest, erratic in the collection from Dębina on Miedwie Lake. Erractics are kind of natural monuments. On some of them, memorial plaques are installed. They concern important events from the history of the town and the whole region.

In 1973, the abovementioned glacier erratic from Miedwie, added splendour to the celebrations of the 800th anniversary of the arrival of the Cistercians to Kołbacz. It is a big-size, red-brownish Rapakivi granite which came from the Aland Islands on the Baltic Sea. It has 9 meters in perimeter and it is 2,2 meters tall. It weights approximately 40 tons. As a monument of nature it has been under special protection. Another erratic, which is also of impressive size (perimeter 10,4 m, height 1,55 m), commemorates Western Pomerania’s return to Poland. The plaque was added in 1985, on the day of the 40th anniversary of that important event. One of the smallest stones has a logo of the Experimental Unit of the Zoo-technology Research Institute. The plaque was made in 1987, to celebrate the 20th birthday of this institution.

While visiting Kołbacz, it is worth finding all glacier erratics. Most of them can be found nearby the Cistercian Abbey and the palace. It is also a good opportunity to see some more, interesting historical places in this town.

: The former Cistercian Abbey
Search nearby
Collection of glacial erratics in Kołbacz
COMMENTS
Sign in to leave a comment.