The town walls
Gryfino was granted civic rights in the second half of the thirteenth century. The then rapid development of the town led to the decision of...
30-04-2015 ·

Domek Kata [the Executioner’s House]
Domek Kata on 3 Grodzka Street is a Gothic burgher’s house erected in the 15th century on a trapezium plan, which was motivated by a curved line of...
12-01-2015 ·

SZCZECIN AZS Yacht Club
This is one of the few clubs in the harbour area and it has been in operation for almost seventy years. If you can sense the atmosphere of the old...
14-01-2015 ·

The Old Town
The buildings in the town date back to the thirteenth century. The Old Town features a few historical objects. These include urban f...
05-04-2015 ·
The First Border Post by the Oder
Home / Discover / Pomorze heritage / Historic Monuments 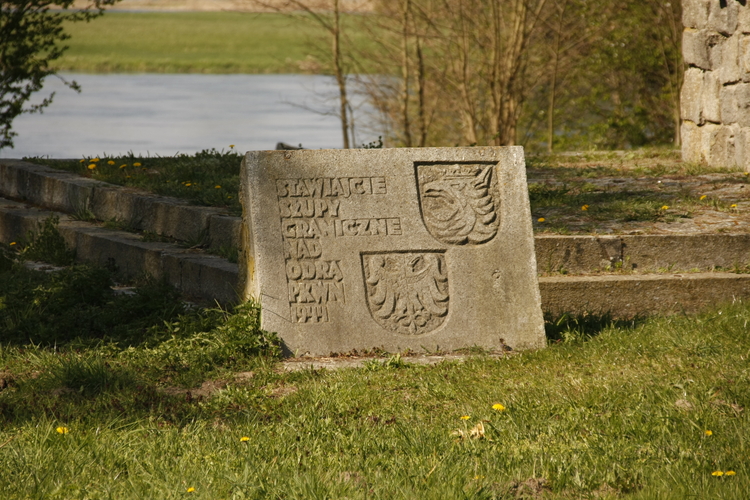 The obelisk symbolising the first border post by the Oder was placed in Czelin, in the north-western end of the village, in a clearing on the banks of the river. A road, at which there are houses No. 7 and 8, leads to it.

A few months before the official establishment of the Polish borders, the soldiers of the 6 Independent Pontoon and Bridge Battalion of the 1st Polish Army placed the first border post on the banks of the Oder on 27th February 1945. The red and white pole was hewed by Corporal Adolf Wydrzyński. The bottle with the foundation act was put in the ground together with the post to commemorate the fact. It had also the signatures of the soldiers participating in the event. A plaque with the inscription 'Poland', an eagle and information about the distances to Warsaw (474 ​​km) and Berlin (64 km) was nailed to the post. Then a message was sent to the headquarters of the Polish Army informing about reaching the Oder and placing the border post. The pole and the bottle were found in 1947. The original act and post can be seen in the Museum of the Polish Army in Warsaw, and their copies - in the Museum of the 1st Polish Army Memorabilia at the War Cemetery in Stare Łysogórki and in the Military Museum in Wrocław. An obelisk designed by sculptress Anna Paszkiewicz symbolising the border post was put in the place of the post in October 1968. The memorial is a reminder of the 1945 event. It has a form of a pillar, and is made of split stone.
There is a small obelisk in the woods about 100 metres west of the obelisk proper. It was designed by Captain Henry Kalinowski, and made by the soldiers from Szczecin-Podjuchy. He was there from 1960 to 1968, at the site of the present monument.