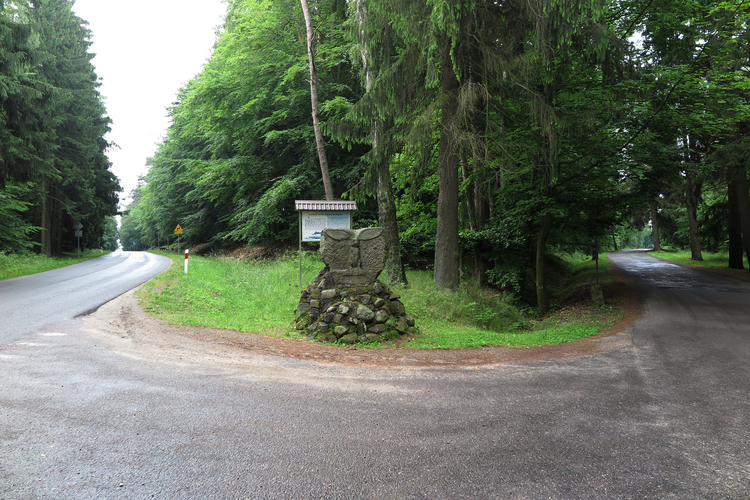 Hare Złocieniaszek is located in Złocieniec in the district of Drawsko. It is located in the northern part of the city at the entrance to Złocieniec from Połczyn Zdrój. It is at the crossroads between Połczyńska and Lipowa Streets.

Hare Złocieniaszek is a nice stone bas-relief depicting a hare. It has very long ears that are set perfectly horizontally. Both of them formerly bore the inscription 'Falkenburg' (the former name of Złocieniec). The hare's ears indicated that both roads led to the town. There was also the inscription in German 'God bless you' on the pedestal. Currently, Złocieniaszek is one of the symbols of the town. Behind the signpost there was placed an information board with a legend ‘The silver Mermaid and the hare from Złocieniec ‘written by Zbigniew Czerwenko.

The story goes that long ago, in Lake Siecino lived a silver Mermaid. She was caught by fishermen one day. She sang beautifully, begging for release. Unfortunately, the parish priest of Cieszyn decided to convert the pagan goddess to the Christian faith and imprisoned her in a local church. He taught her prayers, commandments and ecclesiastical hymns. Meanwhile, all the fish in the lake hid themselves and fishermen were unable to catch anything. The residents were threatened with hunger and poverty. Despite the attempts to convince the pastor to release the mermaid, he did not give in. He sprinkled her with holy water, and she began to sing poignantly. The song was full of regret and longing. Fishermen softened their stance in the end and rushed to the church to help the Mermaid. When they broke into the sacristy, but she had already gone. She fled in the form of a hare towards Złocieniec. The person who turned the Mermaid into a bunny is not known for sure. Maybe it was the god Triglav, maybe the devil, and maybe a witch. The transformation made it possible for her to escape, but the hare began to despair of never being a silver Mermaid again. It began to cry and curse the witch. When it finally reached the edge of the forest, from where the castle and the town walls of Złocieniec could be seen, it was turned into stone. That was how the witch punished the ungrateful hare, which stands at the crossroads today.