The Remnants Of Mediaeval Fortifications
In the 14th century, Barlinek had a system of fortifications that encircled the town with a 7-metre tall and 1,800-metre long wall. The fortificati...
08-04-2015 ·

The Roland’s mound
These are the remnants of a monument coming from the 1920s, placed on a mound raised by the inhabitants of Łobez in order to commemorate 208 citize...
04-02-2015 ·

STEPNICA The marina on Młyński Canal
This charming and quiet place is sheltered from the winds. It is a safe, friendly and green port, and most importantly, free of charge. The canal i...
14-01-2015 ·

The Orlik playing field
The playing field was built as a part of the “Moje Boisko - Orlik 2012” project. Orlik consists of two playing fields which can be used to play vol...
18-05-2015 ·

The beach
The beach in Świnoujście is the broadest beach in Poland and one of the most important attractions of the city. It stretches over the distance of 1...
23-05-2015 ·

Niemierzyn - the old tram depot, currently the Museum of Technology and Communication
The old depot on Niemrzyńska Street was built at the beginning of the 20th century, in 1907. It was created because there was not enough space for...
10-08-2015 · 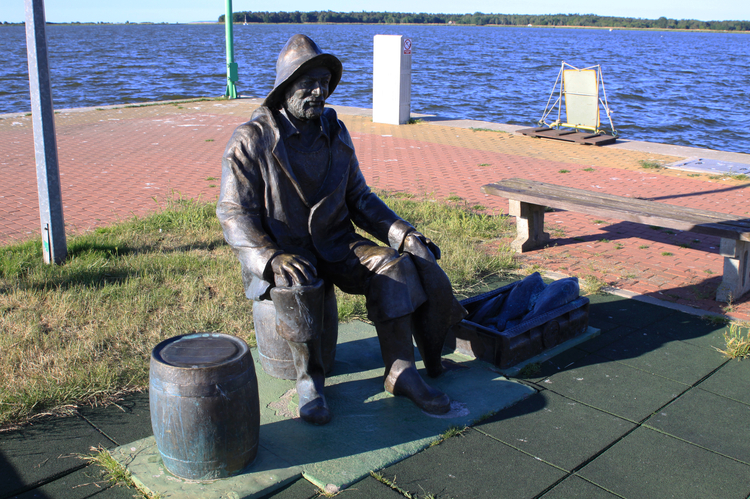 The Fisherman’s Monument in Nowe Warpno is situated at the end of the pier by Nowe Warpno Bay in the town centre approx. 43 km north-west from the centre of Szczecin. Sailors’ Boulevard leads to the monument. Province road no. 114 goes right next to it. The following trails go through the town and its surrounding: a red cycle trail „Wkrzańska Primeval Forest”, and a green International Cycle Trail around Szczecin Bay R-66. The connection between Nowe Warpno and Police is provided by a private carrier Ever-Trans.

The Fisherman’s Monument symbolizes a centuries-old connection between Nowe Warpno with fishing. It is situated on the pier to which the Sailors’ Boulevard leads. The monument presents a fisherman sitting on a barrel, wearing a slicker and a water resistant hat. He has fish in his left hand. There is also a chest with caught fish on the left and another chest on the right. The monument was created by a sculptor Bohdan Ronin-Walknowski from Szczecin. The Fisherman’s Monument was revealed in 2012.

More on the topic:
Geolocation
Search nearby
The Fisherman’s Monument
COMMENTS
Sign in to leave a comment.