STEPNICA The marina on Młyński Canal
This charming and quiet place is sheltered from the winds. It is a safe, friendly and green port, and most importantly, free of charge. The canal i...
29-04-2015 ·
The Garrison Club and the former Military Casino
Świnoujście
Home / Discover / Pomorze heritage / Other points of interest 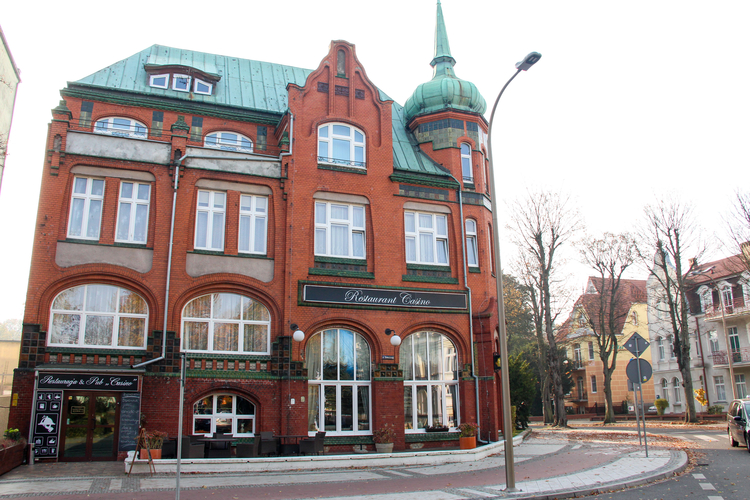 The club is located in the northern part of Świnoujście, at the corner of Piłsudskiego and Słowackiego Streets.

The building of the present Club of the 8th Coast Guard Flotilla was built in the years 1900-1903. The villa named “Merkur” was originally erected for rental apartments. The name of the villa is referred to by a statue of Mercury, the protector of merchants, entrepreneurs, and thieves, located at the top of a corner. The lower floor was intended for retail and service companies. The owner of the villa was Heinrich Ossig who came from Osiek in Lower Silesia. At the time of construction, the villa was very modern. The building was fitted with electric lighting, running water, a sewage system, and garages for cars. On the ground level, there was a wine bar, a tobacco shop, a delicatessen, and the “Bodyga” restaurant. Heinrich Ossig lived in the villa with his family till April 1945. Then, the building was occupied by Soviet soldiers, who left it as late as in 1959. Since then, the villa houses the Garrison Club and a casino. The latter was closed in December 2010. Currently, the building is a seat of the Club of the 8th Coast Guard Flotilla and a private catering establishment referring to the tradition of the military casino.

Geolocation
Search nearby
The Garrison Club and the former Military Casino
COMMENTS
Sign in to leave a comment.