STEPNICA The marina on Młyński Canal
This charming and quiet place is sheltered from the winds. It is a safe, friendly and green port, and most importantly, free of charge. The canal i...
29-04-2015 ·
The former Starosty Office
Sławno
Home / Discover / Pomorze heritage / Other points of interest 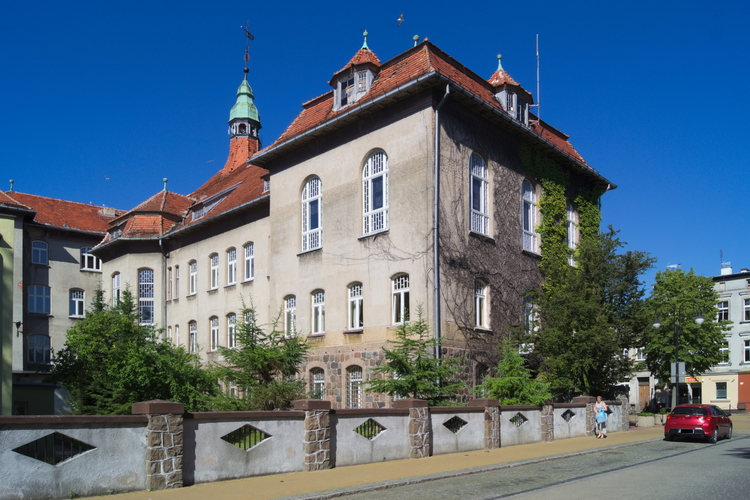 The former Starosty Office is a monumental representative building of the town, built between 1905 and 1907. It was designed by architect Eduard Koch from Słupsk. The building was built in a neo-baroque style. The town bought the area of 3700 m2near the Słupsk Gate from the owners. The facility cost well over 300 000 marks. The building served as the district office until 1945. After the entry of Soviet troops to Sławno, the Starosty Office building was used as the Soviet headquarters, which perhaps saved the building from destruction. Therefore, the original decor, doors, frames, wall and floor tiles, staircase railings have survived. Today, it houses the Town and Community Office of Sławno.

The building was built on the plan of the letter L. The premises of the former Starosty Office is walled with a gate entrance from Chopina Street. The building has a socle of natural stone in shades of grey, pink and blue. Built of red ceramic brick, the walls were plastered, and stucco work was added. The roof is of a mansard type with three-sided insets and a canopy of with gables topped with pinnacles. In the very centre of the building there is an octagonal tower with a gallery, covered with a tented roof. Above it, You can see a pinnacle with openwork ornaments. The building has a basement. Original stained glass and wooden panelling with decorative, metallic ornaments of the vents in the meeting room are in a very good state. Coats of arms of the towns in the former district of Sławno: Sławno, Darłowo, Polanów and Sianów and coats of arms of the Pomeranian families - landowners from the district were placed in the stained glass windows. A contemporary copy of the Lubinus's map hangs in the room.

Original technical equipment has been preserved in the attic. There You can find three reels with wooden spools and metal cords wound around them, which hold the chandeliers in the conference room. By the use of the reels, the chandeliers can be lowered and pulled. There is an interesting chandelier in the mayor's office, made in an art deco style, on top of which there is a sculpture of an owl. A clock from the 1920s has also stood the test of time. In the town hall, there is also a cylindrical multiplier Arlac from the 1920s made by the company of Carl Fr. Brauer from Szczecin. A nameplate: Model 14, No. 6003 was placed on it.

On the first floor of the building there is an art gallery "W Ratuszu” ['At The Town Hall']. It has been operating since 2003. The works of Polish artists (from the region and the whole country), but also from, e.g. Germany, Russia, Bulgaria, Macedonia, Armenia and Argentina. The predominant theme of the exhibitions is drawings and bookplates. The gallery can be proud because there was the hundredth exhibition in 2015.

The former Starosty Office represents a typical public architecture of the early twentieth century in Western Pomerania. It amazes everybody with its splendour and remnants of the decor from the time of its erection.

: The Old Town area
Search nearby
The former Starosty Office
COMMENTS
Sign in to leave a comment.