The stud farm building complex and a park in Świętoborzec
Originally, Świętoborzec was a separate settlement, which was not incorporated into Łobez until the famous stud farm was established. Then, it was...
23-05-2015 ·

The Castle of the Order of Saint John
From the first half of the 13th century Swobnica and the surrounding areas belonged to the Order of the Knights Templar, the headquarters of which...
11-10-2015 ·

Mysia Wyspa [the Mouse Island]
Mysia Wyspa is a perfect destination for a successful trip out of town. The peninsula of Lake Trzesiecko can be reached in many ways, using interes...
23-05-2015 ·

STEPNICA The marina on Młyński Canal
This charming and quiet place is sheltered from the winds. It is a safe, friendly and green port, and most importantly, free of charge. The canal i...
23-05-2015 ·

Parish house of the Holy Mary Collegiate Church
Three historical tenements the remains of numerous buildings which surrounded the old cemetery near Saint Mary’s Church. The tenement in&...
14-01-2015 ·

The Heritage Park - Grupa Warowna Cegielnia [The Fortified Complex - 'The Brickyard']
The Fortified Complex Cegielnia, which is a part of the fortifications of the Pomeranian Wall, is located between Lake Zamkowe and Lake Chmiel Duży...
25-01-2015 ·
The Culture Centre 105
Home / Enjoy / Arts & culture / Cultural centres 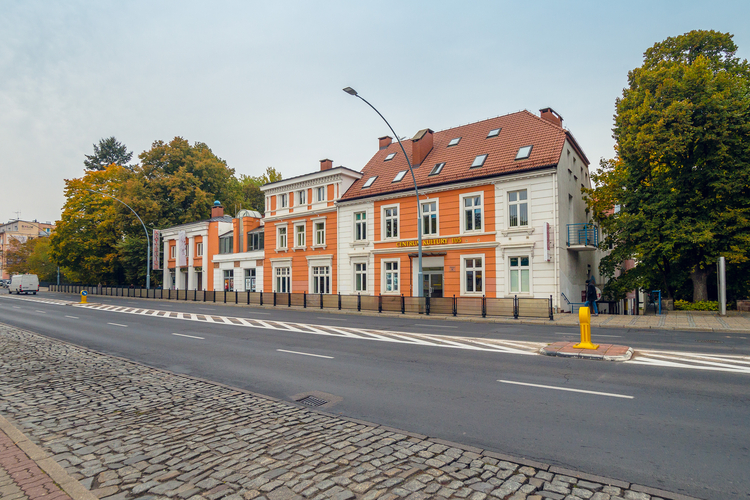 The Culture Centre 105 is located on the main street of the city – Zwycięstwa Street, to the west of the city hall, on the left side of a street, past a bridge over the Dzierżęcinka River. It can be reached by car or using local public transportation.

The name of the Culture Centre 105 comes from the number of a building at Zwycięstwa Street, where the Centre is located. It consists of four tenement houses of different heights, built in 1871 and combined into one building. Before the end of the Second World War, there was a theatre, a concert hall, and a restaurant, eagerly visited by the inhabitants of Koszalin.

The Culture Centre 105 is a municipal entity, whose mission is the promotion and popularization of culture as well as education. The Centre started its activity in 1976, as the Municipal Culture Centre.

The Culture Centre 105 is the main organizer of many cultural events within the city, including the following festivals: the “Młodzi i Film” Movie Debut Festival of Koszalin, the “Ulica Smaków” Culinary Festival, the Hanza Jazz Festiwal, the “Generacja” Rock Festival, and the Festival of Group Accordion Music.

Participation in sections and in selected events is paid.

More info: www.ck105.koszalin.pl
More on the topic:
Geolocation
Search nearby
The Culture Centre 105
COMMENTS
Sign in to leave a comment.