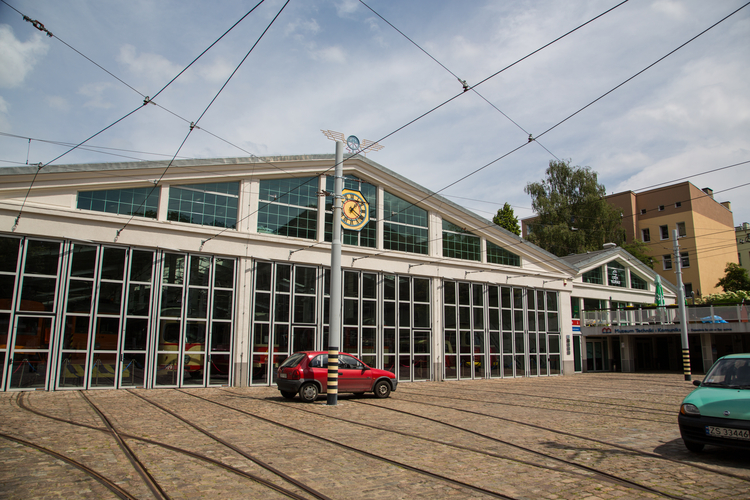 The old depot on Niemrzyńska Street was built at the beginning of the 20th century, in 1907. It was created because there was not enough space for the growing number of trams. The investment was planned on the territory of the allotment gardens and the district cemetery.

The facility was designed by two architects from Berlin – Steinmetz and Griesbach. It has an interesting pitched roof with a glazed front and a clock. Even before the WWII, the depot had been modernised twice – in 1912 and at the turn of 1929 and 1930.

Niemierzyn tram depot was the first such facility in Szczecin. It started to function after the Second World War, it was opened in  1945. It was a facility with 16 rails.

In 2009, modernisation of Niemierzyn depot started, its interiors were handed over to the Museum of Technology and Communication. One year later, the museum was opened. At present, inside the old tram depot, visitors will find historical trams, buses, cars and motorcycles. Among the permanent exhibitions, guest will find the following: “Motorisation in Szczecin in years between 1919-1944”, “Polish motorisation – vehicles in times of Polska Rzeczpospolita Ludowa [Polish People’s Republic]”, “Two-wheel vehicles from PRL [Polish People’s Republic]”, “Polish prototypes” and “Vehicles of the uniformed services”.

The tickets prices are: 10 PLN for a normal ticket, 5 PLN for a reduced ticket, 24 PLN for a family ticket (1 or 2 adults plus kids, max. 5 people), 5 PLN a group ticket (for min. 10 people). On Tuesdays entrance to the museum is free of charge (apart from the “Eureka - the Movement Exhibition”).

In October 2015, the Niemierzyn depot entered the list of historic monuments of the province.

In the museum there is a lift for disabled people, which will help them to get to the exhibition located in the basements, as well as to the café on the first floor. At the ticket office, visitors can buy some souvenirs, apart from tickets.

Geolocation
Search nearby
Niemierzyn - the old tram depot, currently the Museum of Technology and Communication
COMMENTS
Sign in to leave a comment.