The Town Hall
The Town Hall in Wałcz is located in the historical town centre in the western side of the market square. The oldest part of Wałcz has a preserved...
26-04-2015 ·
Trafostacja Sztuki [Art Trafostation]
Szczecin
Home / Enjoy / Arts & culture / Galleries 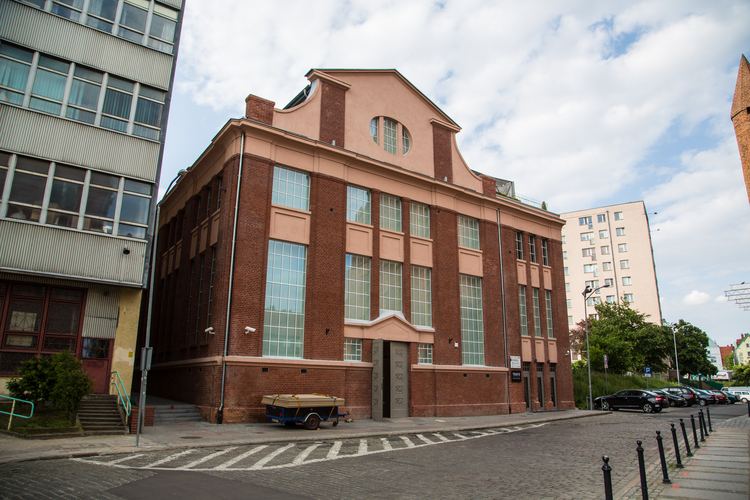 The modernist building of Trafostacja Sztuki was built in 1911. Up until 1945 it functioned as a transformer building for the trams in Szczecin. The initiator of the construction of Trafostacja Sztuki was Ernst Kuhlo, who for many years was said to be Szczecin’s Edison. Kuhlo, a pioneer of the electrification in Szczecin, in the 19th century purchased a lot at Św. Ducha Street and built the building. It was designed by Georg Vallentin, who designed this monolithic hall. The building served its role up until 1945.

After the 2nd World War the building was taken over by Szczecińska Elektrotechniczna Spółdzielnia Inwalidów Selsin [Selsin Electro-technical Cooperative of the Disabled in Szczecin] which was involved in producing different objects – from lamps to toys. Selsin functioned in the building at 4 Św. Ducha Street up until the 70’s of the 20th century. For the next 20 years it was empty and in the 90’s of the 20th century it was acquired by a private investor. Despite his plans, the new owner did not modernize or manage the space of the former transformer building – finally the building was acquired by the municipality.

From 2013 there is a centre of modern art “Trafostacja Sztuki – TRAFO”. The building was modernized in accordance with a plan of Studio A4, an architectural office from Szczecin. The brick elevation was renovated and there were also works conducted inside the building.

Inside there is the central exhibition space: it is open and it uses the height of the building. In the main hall apart from exhibitions, there are also concerts and performances organized. Around the main hall there are viewing galleries which allow events to be observed in the space from different levels. Other exhibition halls are situated in the basement which is separated from the first level by partially glassed floor. Bright colours dominate inside the building – mostly white. Moreover, in “TRAFO” there are: rooms for artists, a conference hall for approx. 25 people with social facilities; there is also a coffee bar, reception, cloakroom, reading room and library.

Ticket prices for one exhibition are between 5 PLN/person with a family ticket (max. 7 people) or a group ticket (more than 10 people), to 10 PLN for a normal ticket. The building is adjusted for the needs of the disabled – there is an elevator for people on a wheelchair.

The building of Trafostacja Sztuki was included on the list of monuments in the province in April 1984.