STEPNICA The marina on Młyński Canal
This charming and quiet place is sheltered from the winds. It is a safe, friendly and green port, and most importantly, free of charge. The canal i...
29-04-2015 ·
Caste of Dukes of Pomerania
Darłowo
Home / Enjoy / Arts & culture / Galleries 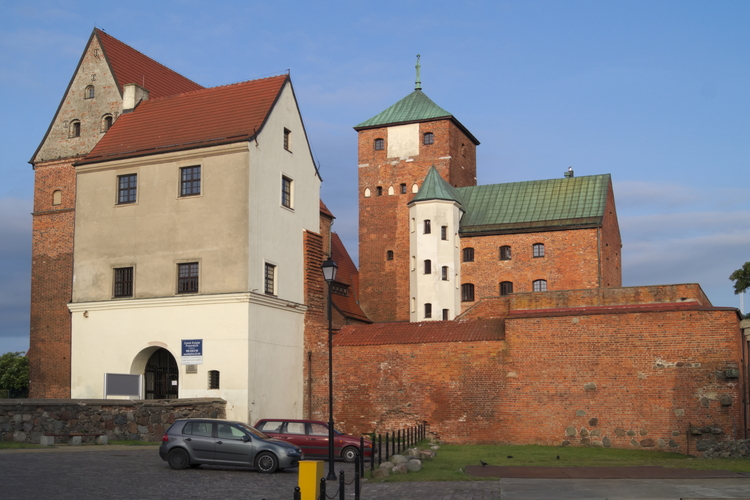 The castle is located near the core area of the town centre, on the Wieprza River. Tourists who are in the main square of the town – Plac Kościuszki [Kościuszko Square] - must head south towards Powstańców Warszawskich Street [Insurgents of the Warszawa Uprising Street], and continue towards Podzamcze and Zamkowa Street. The castle is just 250 meters from the town’s main square.

The castle in Darłowo is the only Gothic fortress on the Polish coast. It has been protecting Pomerania since the second half of the 14th century. So far, no documents which could confirm the exact date of its erection have been found. It is known, however, that in 1352 the ruler of Darłowo – duke Bogislaw V, married to Elizabeth, the daughter of Casmir the Great –  purchased the island on the Wieprza River with a mill from a rich burgher of Darłowo. Surely, his intention, at that time, was to erect a fortified building which could also serve representative purposes. Construction works lasted for almost 20 years. The fortress which was built then, was similar to the present shape of the castle. Its floor plan resembled a square. The fortress yard was protected by a 14-meter wall with battements. In the northern wing, there was a gateway which led the town. The fortified southern gateway led to the castle’s utility grounds, to the farm and to the damps of the salmon farm. It was protected by a tower which was 23-meters high. The castle housed servants’ apartments, there was also a knights hall, duke’ s administrator’s seat, a great hall, chambers of the ducal family, a treasury and a chapel. Stairs inside the walls served as circulation space in the fortress.

The first, major rebuilding of the fortress was conducted by the famous duke – Eric of Pomerania. After he lost his thrones in Denmark, Sweden and Norway, the defeated ruler settled in his hometown - Darłowo. The last years of his life, 1449-1459, he devoted to rebuilding the castle in Darłowo to make similar to his former seat in the Danish Helsingør. Within one decade, the castle gained a two-storey wing and an additional ring of defensive walls.

The newly created wing, however, was soon disassembled. Around 1480, Bogislaw X, concluded that the castle yard was too small. He gave order to disassemble the outbuilding erected during Eric’s reign, and to expand the castle outside the wall. As a result, a new, three-storey wing with a basement was built. It was called “the Wieprza wing”, and it became the core part of the fortress. Bogislaw, however, was still not satisfied with the size of the castle yard – he expanded it by dismantling the inner part of the southern wing. But it was still not enough to satisfy the fast-growing needs of the ducal seat. Although Darłowo was only a temporary burial place for the rulers of Pomerania, they still wanted this place to be worth of their rank and ambitions. In the first part of the 16th century, Barnim XI started the last reconstruction of the castle in a Gothic style. Two storeys were added to the western wing, and the tower was elevated, so it was now 26 meters high. Around 1571, duke John Frederick, rebuilt the northern gateway in a Renaissance style. After the fire in 1624, Bogislaw XIV decided to improve castle’s residential role at the expense of its defensive function, then, the Darłowo fortress gained its final appearance. Big window openings appeared in the chambers of the west wing. Plans for renovation of the complicated vaulting in the knights hall were discarded. The hall’s function was transformed, it had been used as a chapel since then. After Bogus law’s XIV death, his wife Elizabeth moved into the castle. She took care of the heritage of the Pomeranian House of Griffins. After her death, the castle came into the hands of the Brandenburg. From that moment, it ceased to function as a ducal seat.

In the 17th century, there were two great fires in the castle. The fortress underwent several transformations - it served as a salt warehouse, as a hospital and as a prison. During the interwar period it was renovated. After that, the decision was made to turn it into a museum of the region. The first exhibition was opened for viewers in 1930. The castle managed to survive as a museum despite  the changing borderline of the country, and the changes of the authorities managing the castle. Right after the war, the museum was opened again. Fortunately, it did not suffer from much damage during the war. However, complete renovation and revitalisation were necessary. They were conducted in the 1970’s. After 17 years of renovation works, in 1988, the gates of the castle were again opened for visitors.

The permanent exhibition, in the castle museum in Darłowo, is divided into several parts. In the former knight’s hall, which later served as a chapel, visitors can admire religious art from the region of Sławno. The medieval church pulpit is certainly the most impressive item in the collection. The ornamented pulpit made of linden wood, and covered with gold, was the Elizabeth’s (Boguslaw’s wife) votive offering. Three, late Gothic sculptures also draw attention – one of them, the sculpture of The Virgin and Child with St. Anne, was used as a prop in the film adaptation of  “Krzyżacy” [“The Knights of the Cross”]. On the first floor of the connector building, historical objects of the local, folk art are displayed. There is also a reconstruction of a timber framed wall, as well as the water paintings, oil paintings and drawings portraying wattle and daub buildings. The tower in the castle serves as an example of interesting architectonic solutions- rib and groin vaulting and a staircase inside the wall. In this room, visitors can look at bronze plaques of the Polish rulers. In the southern wing of the fortress, there is a humble display of eastern art, which dates back to the prewar period. One of the most precious items in the collection is hanging on the wall of the first floor of the western staircase. It is a map of Pomerania, created by Lubinus. The map includes many details and precise information. Cities, towns, villages, castles, taverns, etc., were all marked in a different way. Lubinus marked even deciduous and coniferous forests. In the upper part of the map, there is a genealogical tree of the Dukes of Pomerania, and in the bottom part, there is a short description of the Western Pomerania. In the great hall, on the first floor of the eastern wing, engaged couples who wish so, may get married. The museum also houses a vast collection of Baroque and Neo-baroque furniture, ornamented with exquisite chip carvings. A Late-Renaissance four-poster bed, which is displayed on the second floor of the northern wing, is also worth seeing. This bed is special, not only because of its rich ornamentation, but also because it has an interesting inscription in Italian: “Conquer the sleep with love”. Another interesting thing to see in this chamber is the “garderoba”- type of a medieval toilet in the castle. The torture chamber has been preserved in the basement, where a vast collection of torture tools is displayed. This place is particularly popular with the youngest visitors. One of the peculiarities of Darłowo museum is the two-headed, taxidermed calf, which was born in 1919, in one of the nearby villages -  Janiewice.

One of the recent attractions in the museum, is an exhibition devoted to the history of Darłowo, which is displayed in the exhibition pavilion, in the eastern wing of the castle. It is titled “Dirlow- Rügenwalde - Darłowo. Town on the Baltic See”. It embraces the complicated history of this royal town. Every visitor should climb the tower to admire the beautiful panoramic view of the town, the Wieprza River and the surrounding area. However, much more popular with the tourists, who come to visit this place, is the observation deck, located in one of the castle’s wings.

A great number of tourists visit the castle every year, not only to see the museum’s rich collection, but also to admire the medieval architecture and to feel the atmosphere of the bygone centuries.