The German lapidarium
In the place where there is the lapidarium right now, German public cemetery was located since 1881; it was finally liquidated in 1970. Burials, ho...
05-02-2015 ·

Sports hall
The hall is a modern and well-equipped facility where sports events, i.e. volleyball, handball, football, tennis and badminton matches, can be orga...
06-12-2015 ·

The Orlik playing field
The playing field was established as a part of the “Moje Boisko - Orlik 2012” project. It consists of two playing fields which can be used to...
18-05-2015 ·

The Town Fortifications
Due to the condition in which the defensive walls have been preserved, Pyrzyce can be easily  called Polish Carcassonne. The first m...
28-04-2015 ·

SZCZECIN Marina Hotels
They are fully equipped with mooring spaces and can provide comfortable ways for yachtsmen to spend their leisure time, as well as entertainment. T...
29-04-2015 ·

Hobbits’ Village
The Hobbits’ Village is one of the theme villages which were created as part of the project whose main aim was to invigorate the village and to int...
09-05-2015 · 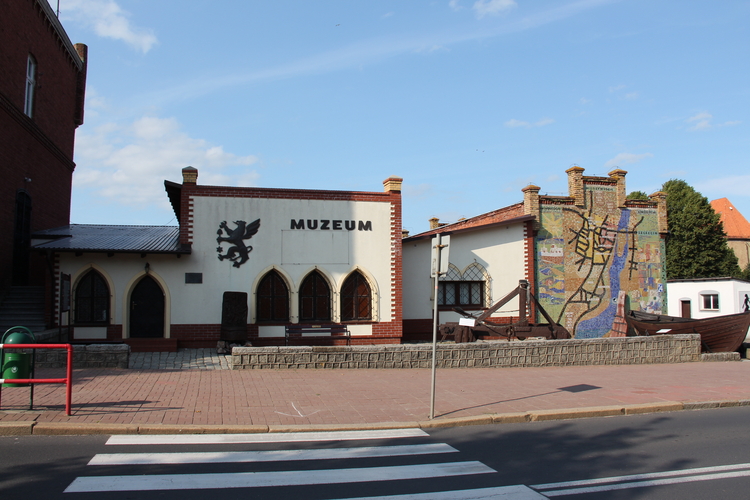 The Andrzej Kaube Regional Museum in Wolin is located in the centre of the old town, just next to the Town Hall.

The Andrzej Kaube Regional Museum in Wolin was established in 1966, on the initiative of Professor Władysław Filipiak, a great explorer of the Wolin region. Owing to his archaeological works, defensive walls, a port, suburbs and cemeteries of Wolin were discovered. His search confirmed historical facts known earlier form chronicles only. The museum in Wolin presents the entire fascinating history of Wolin, illustrated by numerous exhibits found in the Wolin region. The collections are presented in several rooms. The first room houses the main exhibition called “Śladami wczesnośredniowiecznego Wolina - Winety – Jomsborga” [The traces of mediaeval Wolin – Wineta – Jomsborg]. It shows the history and material culture of Wolin from the establishment of the settlement at the turn of the 6th and 7th centuries till its fall in the 12th century. The exhibition includes a mode of the town from the period of its greatest splendour, the remnants of town fortifications, a defensive system of the town, as well as objects of worship and ways of burial. Among the valuable items presented on the exhibition is a wooden, four-faced figure of Świętowit, a solar compass – the only complete compass of this type in Europe – a model of harbour, a fragment of a palisade, or a grave of a convict. In the second room, we can get familiarized with the economy of the inhabitants of Wolin. Numerous findings confirmed that the wealth of Wolin based on trade and a highly developed craft, both the production of everyday use items and the production of those luxurious objects for export. The presented crafts include: metallurgical industry and smithery, non-ferrous metal processing, glaziery, developed amber processing, and shoemaking. In the third room, the oldest traces of humans in the Wolin region are presented. We can see the oldest exhibit of the museum there – a head of a harpoon from the late Palaeolithic. Furthermore, farming tools from the Neolithic and the Bronze Age can be seen. The Bronze Age is the period from which one of the most precious exhibits of the museum comes from. The so-called bronze treasure is a collection of beautiful embellishments that belonged to a member of the Lusatian culture. The exhibit is made of bronze, weighs more than 2.5 kg, and consists of necklaces, bracelets, pins, a pauldron, a fragment of a fibula, and a knife. The treasure was buried about 950 years ago. The next room presents the modern history of Wolin, with particular emphasis on the last months of the Second World War, when the town was destroyed. The fifth room is a temporary exhibition room, where the results of archaeological works are presented. In the sixth room, there is the exhibition called “Johannes Bugenhagen - Wolinianin i obywatel Europy” [Johannes Bugenhagen – an inhabitant of Wolin and a citizen of Europe]. It presents the life and accomplishments of this historiographer of Pomerania born in 1485. In the museum, there is also a conference room, in which we may see a collection of maps of Pomerania, including the Great Map of the Duchy of Pomerania from 1618.

The museum is a communal entity. It is an administrator of the mansion of the von Below family, which is located just net to the museum and is a seat of the International Cooperation Centre. The institution has participated in the Night of Museums for several years. Visitors can use personal audio guides available in various languages. Thursday is a free admission day.

More info: muzeumwolin.pl
www.muzeumwolin.pl/kontakt
More on the topic:
Geolocation
Search nearby
The Andrzej Kaube Regional Museum
COMMENTS
Sign in to leave a comment.