STEPNICA The marina on Młyński Canal
This charming and quiet place is sheltered from the winds. It is a safe, friendly and green port, and most importantly, free of charge. The canal i...
29-04-2015 ·
The Museum of the Struggle of the Pomeranian Wall
Mirosławiec
Home / Enjoy / Arts & culture / Museums 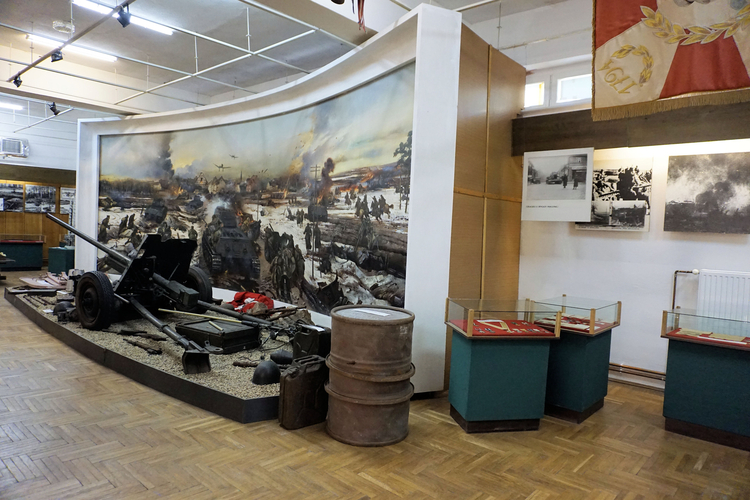 The museum is located in the centre of Mirosławiec. While driving along Wolności Street (the national road No. 10), turn into Parkowa Street. An open-air exhibition located in front of the museum is clearly visible already from the crossroads.

The Museum of the Struggle of the Pomeranian Wall in Mirosławiec in its exhibitions shows the history of the struggle for the Polishness of Central Pomerania throughout history: during the Piast period, in times of Polish-Swedish wars, the Napoleonic era, after the partitions, and during World War II.

The idea of ​​organising a museum in Mirosławiec was born in early 1983, and in June that year the first construction works began. The city's showcase was to be built in place of the municipal square. The project was prepared by the architects from Piła. A special team planning and supervising the works was created at the office of the Head of City and the Commune.

The deadline for opening the museum was set at October 12th, 1983 was set in order to synchronise it with the 40th anniversary of the creation of the Polish People's Army. The whole building, however, could not be fished in such a short time, so only the upper floor was prepared.  The acquisition of exhibits involved a lot of people. Even nationwide television addressed a message to former soldiers, members of ZBoWiD [the Society of Fighters for Freedom and Democracy], to provide the memorabilia involving the liberation of the Pomeranian Wall, or related to the war. A considerable amount of photographs were taken, and copies of historical flags of the Polish People's Army were made. A mock-up imitating the warfare at the Pomeranian Wall was prepared. The grand opening of the museum in Mirosławiec took place twice. The first one took place on 12th October 1984. It was of a military nature and was connected with the celebration of the 40th anniversary of the creation of the Polish People's Army. The second opening ceremony took place on 16th March 1985. There were then many famous actors and other artists: Witold Pyrkosz, Emil Karewicz, Emilia Krakowska, Janusz Przymanowski, Romuald Dobraczyński and many others. The representatives of the Ministry of Defence and of the government and political parties were present.  Such were the beginnings of the museum.

The subsequent years were poorer and the number of visitors was gradually decreasing. Therefore, it was decided that the renovation of the museum is necessary. In December 2011, under an agreement with Radowan Protić to borrow exhibits from him, the Museum's collection was supplemented with many objects collected by the Protić family in the vicinity of Mirosławiec.

Currently, the museum presents its collections in two rooms. The first one focuses mainly on the battles near Mirosławiec. The second one is the History Room of Military Aviation in Mirosławiec, depicting the 59 years of the presence of air force in Mirosławiec. The exhibition consists of photographs or charts depicting events of aviation (including the visit of Fidel Castro and Yuri Gagarin in Mirosławiec), a pilot's seat and uniforms. A part of the exhibition is devoted to the airmen who died in the plane crash of the CASA.

There is also an interesting exhibition dedicated to bison, created in the project' Securing the bison population in the north - western Poland against tourist pressure.'

In front of the museum there is an open-air exhibition presenting artillery, a tank T-34 and a Su-22 aircraft.

Geolocation
Search nearby
The Museum of the Struggle of the Pomeranian Wall
COMMENTS
Sign in to leave a comment.