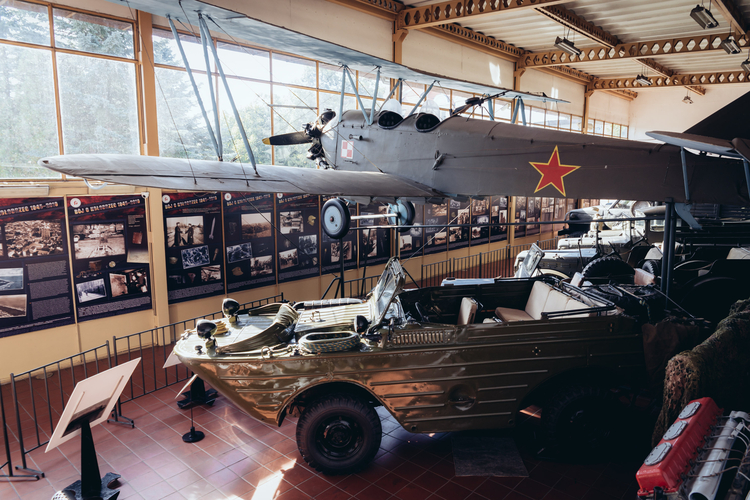 The museum is located in different parts of the city. In the centre, at the area of over 500 metres, You can see the pavilion and the open-air exhibition History of the Polish Army, and the Merchant Tenement House, which are located at ppor. Emilii Gierczak Street. There is also the History of the City Section located at Armii Krajowej Street near the basilica. One and a half kilometre farther, in the western district, which is closer to the fishing port, the Maritime Heritage Park is located at 31 Bałtycka Street.

The centre is within the paid parking zone and the network of one-way streets. Getting to the area of ​​interest by E. Gierczak Street is only possible from the side of the Parsęta River along Rzeczna Street. Aircraft, tanks and cannons can be seen from behind the fence after passing the intersection with G. Narutowicza Street. Rzeczna Street has apparently a large number of parking spaces, but the number is not enough in the season. The Maritime Heritage Park can be reached by driving down Solna Street and into Bałtycka Street. The area around the museum is still not paved. The last hundred metres of the access road runs along a dirt road. While driving along Solna, behind the Kanał Drzewny [a distributary channel of the Parsęta River] You can notice massive grey hulls of ships put ashore, which makes the location of Skansen very simple.

Although the name 'Museum of the Polish Army' suggests great military collection and encourages to visit it for this very reason, it does not reflect the whole truth about this institution. It has a much richer offer, because its four branches located in different parts of Kołobrzeg have not only military collections, but also archaeological finds proving impressive more than a thousand years of the history of the city.

The museum started its operations in 1963 as a military museum. Today, however, the nature of the institution can be described as a military, historical, municipal and maritime one.

The main attraction of the institution is the 'hue and weapons,' or arms, equipment and uniforms of Polish troops from the Middle Ages until today. They are gathered in the pavilion and at an outdoor exhibition in the city centre. Visitors can see the exhibits known from school, books and films, but they also discover interesting facts such as the world's only flat projectile to the Shuvalov's secret howitzer. Another attraction is the original copy of the cipher machine 'Enigma'. The same pavilion has, among other things, a wreckage of a German plane Focke-Wulf 190, fished from the sea near the entrance to the port Kołobrzeg as late as 56 years after the war - in September 1991. Another interesting exhibit is an anti-tank rifle UR, which pierced each and every tank during the war, making 20-millimetre holes in the armour. While wandering through the place rich in history, from arrowheads and hussars’ feathers, You get to a convincingly arranged exhibition dedicated to the Battle of Kołobrzeg in March 1945 with an impressive painting - a panorama on canvas. Then we step outside, where the cannons are placed, as well as self-propelled guns, planes and tanks, including famous T-34, almost the same as 'Rudy 102’, in which the crew of the well-known series fought during the war. Ballistic Scud missiles, MiG-19 and Iryda planes are examples of modern military technology to be seen in the museum. The collection of exhibits is constantly being expanded, and many of them are used in films.

There is another attraction neighbouring with the arms. The museum includes a modest merchant townhouse building from the fifteenth century. It should be added that its owner was not among the financial elite of Kołobrzeg. He drove a horse cart through the gate preserved to this day. He stored the goods in the basement, and his family lived above. Hens and pigs were bred in the backyard. In the town devastated in numerous wars, including the World War II, even this house is a treasure that should be appreciated.

A completely different atmosphere prevails in the bicentennial palace of the family of Brunszwicki (the Braunschweigs). There, in three large rooms, on the ground floor and in the basement, collections are placed. These are mostly archaeological discoveries concerning the history of the city. The elegant building, typical of the Empire style, has 'the Ceiling Room' on the first floor, decorated with paintings and knight's armours, and which hosts concerts and cultural events. The history of Kołobrzeg is interwoven with multiple themes: settlement at the mouth of Parsęta, the beginning of salt boiling, the chartered city, Hanseatic city, a fortress, and a health resort in the end. An interesting collection comprises archaeological finds such as a thirteenth-century statue of St John the Evangelist made of wood, coins, fabrics, jewellery, or examples of craftsmanship and everyday objects.

The Marine Heritage Park is the newest division of the Kołobrzeg museum. The very putting the ships ashore with the help of huge cranes in 2012 was interesting enough. The hulls were placed on prepared supports. What is more, not only vessels are shown to visitors, but also, among other things, rudders and screws. After the withdrawal from service, whereby the ships ORP Fala and ORP Władysławowo were salvaged. Visitors have the opportunity to pass through a room for the crew, an engine room, a kitchen, captain bridges and gunners' positions on the ships, which particularly appeals to the imagination. To feel cold steel, to inhale the smell of grease and to avoid bruises in narrow corridors is like becoming a sailor yourself. Some fragments of ORP Burza, naval mines and torpedoes are also exposed at the park.

This one of the most popular museums in Poland; about 130,000 visitors come there each year.

: Ratusz [the Town Hall]
Search nearby
The Polish Arms Museum
COMMENTS
Sign in to leave a comment.