STEPNICA The marina on Młyński Canal
This charming and quiet place is sheltered from the winds. It is a safe, friendly and green port, and most importantly, free of charge. The canal i...
29-04-2015 ·
The Museum of Open-Sea Fishing
Świnoujście
Home / Enjoy / Arts & culture / Museums 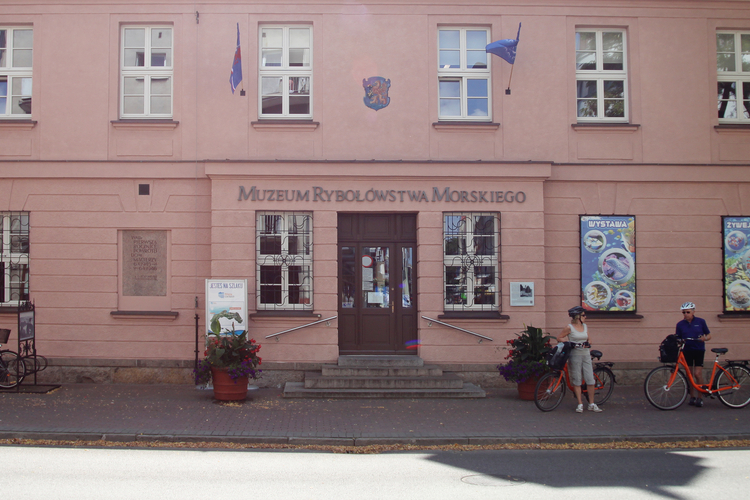 The Museum of Fishing in Świnoujście was established in 1974. The Museum is located in the historic building of the town hall. It is the oldest building in the city – a classicist two-storey building with a high roof and a little openwork tower. Over the main entrance, there is a coat of arms of the town of Świnoujście. The need for building a town hall appeared in 1765, before Świnoujście was even granted city rights. A place where city offices would have its seats and where inquirers would be seen was needed. In spite of the fact that the town was developing very quickly, Friedrich Wilhelm, King of Prussia, and the officials of Szczecin delayed the decision about the construction of the town hall. In 1772, it was decided that the town hall would be built according the design of builder master Meyer. Unfortunately, the application of amendments to the design lasted so long that the building of the town hall was not built earlier than the years 1805-1809. The new building housed the city authorities, a court, a customs office, a tax office, a fishing office, a navigation commission, and a military post. The multitude of the offices resulted in the lack of space, so it was decided that the building should be extended. These were makeshift and ill-considered actions. In the 1880s, the institutions started to move their seats out of the building. A regional museum was then set up on one of the floors. After the Second World War, the history came full circle, and the building became a seat of city authorities. As it happened before, after some time there was again a shortage of space in the building, the city authorities were moved, and the Museum of Open-Sea Fishing was opened in the building. In front of it, in a square, there is a boulder with a plaque commemorating sailors – the inscription on the plaque says: “for those who did not come back from the sea”.

The museum’s exhibition consists of three sections, each of them located on a different floor. On the ground floor, there is natural science department. In front of the entrance, visitors can see two gigantic shells of the largest mussel living in our times - Tridacna. The natural science exhibition is divided into three parts presenting life of fauna and flora of three climatic zones. We can see plants and animals of the Baltic waters, of cold Arctic waters, and of warm waters. Visitors will find a large collection of shells, plants and prepared animals. The exhibition is enriched with aquariums where visitors can watch such animals as an enormous piranha, turtles, or shark catfish. Furthermore, we can see “the Baltic gold” – an exhibition of amber.

On the first floor, there is a maritime section that exhibits fishing equipment, models of fishing boats and navigational instruments. The exhibition shows changes that took place in fishing throughout the centuries. We can see tools used by people during fishing. What is worth noticing is the exhibition “Sailing ships’ models”, where visitors can find very precisely reproduced models of historical sailing ships.

On the second floor, there is a historical section. Visitors can get familiarized with the history of Świnoujście. The exhibition includes photos showing how the town used to look like. It also shows life and customs of the inhabitants and archival documents, coins, and everyday use items from various periods of the development of the town.