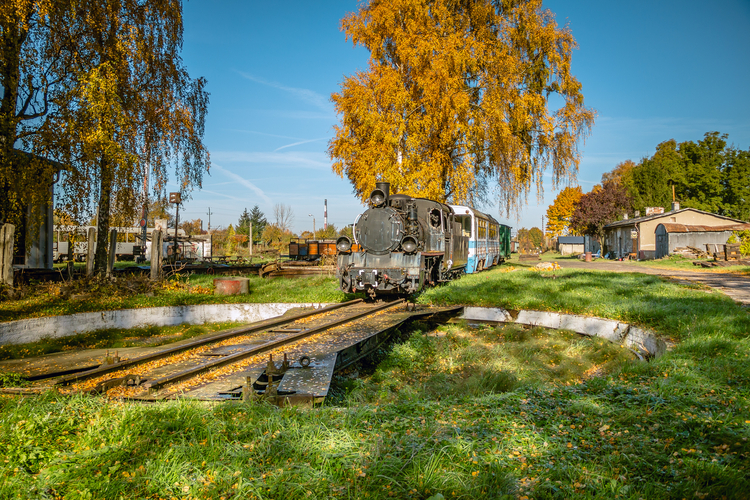 The line of the Narrow-Gauge Railway in Koszalin is located in the north-eastern part of the West Pomerania Province, it runs from Koszalin to Manowo. Dworzec Koszalin Wąskotorowy [Koszalin’ Narrow-gauge Railway Station] is on Kolejowa [Railway] Street. To get to the railway station from Zwycięstwa [Victory] Street, you need to turn left under the railway bridge, next to the PKS’s bus station, and go towards Kolejowa Street. The railway station is on the right, 200 meters from the begging of the street. There are 5 parking spaces in front of the station.

The narrow-gauge railway in Koszalin started to function 1898, with the initial track gauge of 750 mm. After the war, while the tracks were renovated, the track gauge was changed into 1000 mm, this way it was adjusted to the remaining narrow-gauge railways in Western Pomerania. It had its glory days in the 1950’s. At that time, the railway ran to Bobolice. As the time went by, the following sections of the track were shut down. In 2001, the Narrow-Gauge Railway in Koszalin was finally closed down. In 2005, Towarzystwo Miłośników Koszalińskiej Wąskotorówki [Society of Fans of the Narrow-gauge Railway in Koszalin] was registered. Its main aim was to restore the devastated route to Rosnowo, to restore the locomotive depot and the old, rolling stock. Thanks to its work and the commitment of the citizens, the railway went back on track in 2008.

At present, the final station is in Manowo. Renovation of the track to Rosnowo is still in progress. The route begins in Koszalin, at the railway station called “Koszalin Wąskotorowy”, then it runs through the southern part of the town, between the old and the new part of the cemetery. Then, it crosses the national road No. 11 towards Poznań, and passes Bonin where the passenger station is located near the level crossing. Next, the track goes through the forests and the surrounding farmland, and finally its route ends in Manowo. Renovation and reconstruction works are still in progress in order to restore the former route to Rosnowo (Rosnowo Lake). Passengers would then be able to enjoy the view of the lush, green forest – a paradise for amateurs of mushroom picking.

The whole way, passengers travel in a passenger carriage, renovated by volunteer workers, which is pulled by a diesel locomotive. During summer, and for special occasions, a buffet car is also attached. A special carriage for free transport of bicycles is also available.

Towarzystwo Miłośników Koszalińskiej Wąskotorówki [Society of Fans of the Narrow-gauge Railway in Koszalin],which manages the narrow-gauge railway, offers special order trips. The offer includes tours around Manowo and the nearby places, e.g. trips to a hunter shooting range, educational pathways on Czapla Góra [Heron’s Mountain] in Manowo. The participants, if they wish, can organise bonfires or take a ride in a handcar.