Turkusowe Lake
Turkusowe Lake was formed on the site of a former chalk pit. A Portland cement factory, founded by Johannes Quistorp in 1829, operated in the nearb...
08-04-2015 ·

The Kasprowicz Park
The present Jan Kasprowicz Park was established in 1900 as “Quistorp Park” in honour of Johannes Quistorp, a philanthropist and entrepreneur from S...
27-04-2015 ·

The Sports and Entertainment Hall
The building has two floors; the ground floor consists of a hall, a cloakroom for spectators, locker rooms with bathrooms for players. The fir...
29-04-2015 ·

The Co-Cathedral Basilica
When the town became established in a new place after its foundation in 1255, a construction of a large church started at the end of the 13th...
10-05-2015 ·

The stadium of LKS Sparta Węgorzyno
The stadium belongs to the LKS Węgorzyno sports club. It has a natural grass surface, capacity of about 2100 people (room for 300 people stand...
12-03-2015 ·
The Republic of the Imagination
Mirosławiec
Home / Enjoy / For Children 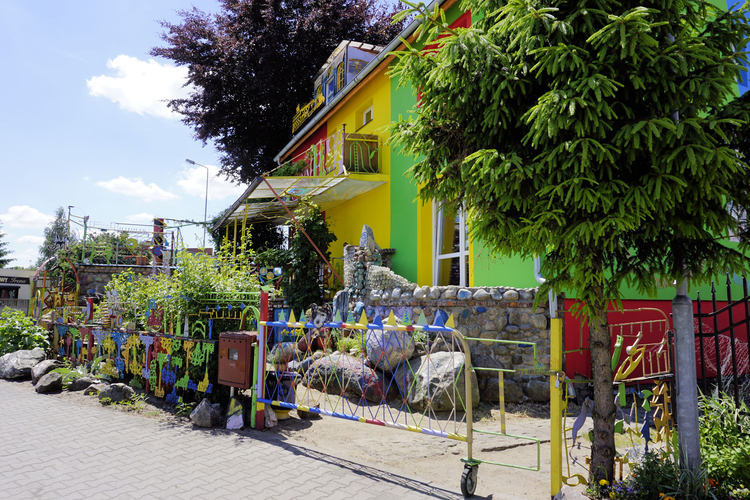 The Republic of the Imagination is in Mirosławiec, at 1A Spokojna Street, in a building so characteristic that You cannot miss it while driving through Mirosławiec.

The Republic of the Imagination is an extraordinary and unusual place. Everyone who drives through Mirosławiec must notice an oddly decorated and fabulously colourful house at one of the main intersections of the town. Not everyone decides to enter inside, but the one who dares will feel like in a fairytale world. A feast of colours, the accumulation of usual and unusual objects exposed in a specific manner, makes everything take on a new different meaning. The Academy of Mr. Kleks? Alice in Wonderland? simply THE REPUBLIC OF THE IMAGINATION! For here the imagination works differently than behind the walls of this building. That cannot be told, described, photographed. This is a must see. Artistry is revealed not only in the appearance and atmosphere of the place. The menu is also unusual there. What is cooked there is not lunch, breakfast, dinner but culinary masterpieces are created.

The Republic of the Imagination is an initiative of American Solveig Sherwood and Pole Irena Protic, who, inspired by the works of Austrian artist Hundertwasser, decided to create something that had never been in Mirosławiec before. This artist, not well-known in Poland, preferred fancy combining of forms and colours, while using the materials considered as unnecessary garbage. This style was used to refurbish the house in Mirosławiec. Local artists, handymen, seamstresses worked and played with that work. Later on, people from all over Europe joined in the fun, bringing their own original ideas. After two years the Republic of the Imagination was established with its own specific, but not understood by everyone, style.  For some people it is a wonderful, fairytale, courageous work of artists. Nevertheless, few people remain neutral, so you might want to check personally how the Republic of the Imagination look like, come in, look around, be surprised (because every room is different), listen to what it says and ... let your own imagination work. There is a rich offer for tourists: 4 guest rooms, open kitchen-restaurant, a mini hall for concerts, shows, exhibitions, and a gallery where You can buy handicrafts of local artists.

More info: http://republika-wyobrazni.pl/
More on the topic:
Geolocation
Search nearby
The Republic of the Imagination
COMMENTS
Sign in to leave a comment.