The communal forest
The communal forest covers an area of ​​21 hectares. The dominant species in the forest is Scots pine. The stand is composed of English oaks in the...
23-04-2015 ·
The church
Home / Plan your trip / Practical information / Places of religious cult / The Roman Catholic Church 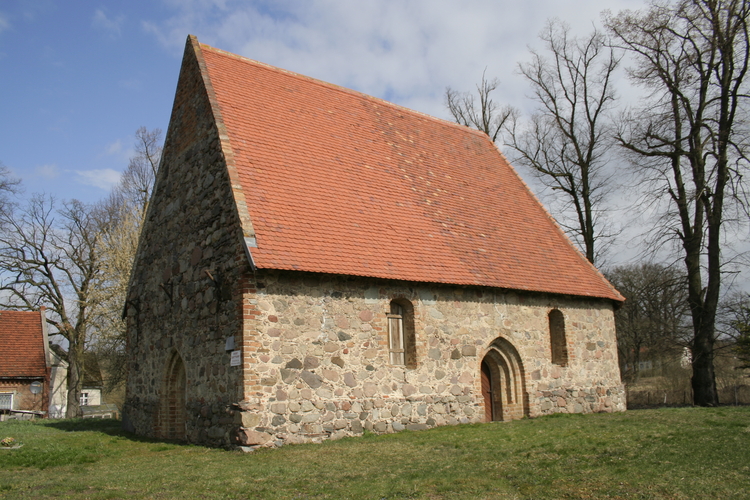 The church in Mętno Małe was built at the turn of the 14th and the 15th centuries as a branch church of the parish in Mętno. From the 16th century to 1945, the church was used by a Protestant community; since the end of the Second World War, the church has not been used.

The building was built in the Gothic style, on a rectangular plan with a semi-circular eastern part. It was built of granite blocks, but brick was used in the corners of the building. The single-nave building is covered with a pitched roof, which is transformed into a half-cone over the presbytery. In the 18th century, window openings were rebuilt; similarly, the portal on the western side in the late 19th century. Each side wall has two windows, and there are three window openings on the side of the presbytery, with the central lanceted one. In the southern wall of the church, there is a lanceted portal with reveals with three offsets. The main portal with a triangular top is situated in the western façade.

Inside the church, only mediaeval mural polychromies dating back to the 15th century have been preserved from the church’s furnishings. There are paintings showing St Christopher with Christ on his shoulder, the Last Supper, the Last Judgment, and a Pieta with benefactors. The scene of the Last Judgment is placed in the apse of the presbytery, in three large panels. Also, painted consecration crosses in form of a Maltese cross inscribed in a circle have been preserved.

The church in Mętno Małe has been entered into the provincial register of historic monuments in July 1958. The building has survived the Second World War, was then abandoned and vandalized. Currently, the works connected with the renovation of the church have been conducted. Since 2013, the actions have been taken to restore sacral functions to the building.