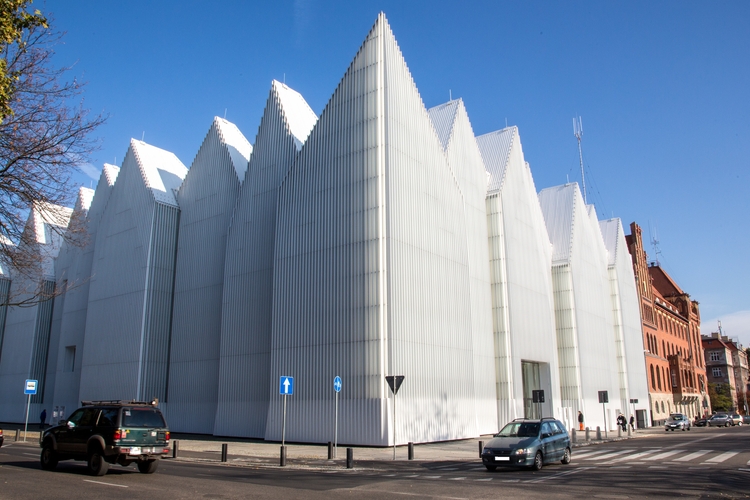 The Philharmonic Hall is located on 48 Małopolska Street, in the city centre. Not far away from the Hall there are: an impressive building of a police station, pomnik Anioła Wolności [the statue of the Angel of Liberty], as well as Brama Królewska [the Royal Gate]. If You take a tram no. 1, 3, 8 or 10, it is best for You to get off at Żołnierza Polskiego, whence it is only less than 500 metres to the Philharmonic Hall. An on-site car park is available.

The Philharmonic Hall is a five-storey building with a two-level underground car park. Its total area is 12 734 m2. The building has 2 concert halls, one of which can accommodate approx. 900 people and the other - approx. 200 people. It is made of white pointed elements that need the external lighting of 25 000 lights. The total sum of investments amounted to over PLN 100 million. The project was co-financed by the Regional Operational Programme of the Zachodniopomorskie Voivodeship, and the author was a company from Barcelona, which was chosen as the best one out of 44 others that submitted their projects to the competition. The building contractor was Warbud, a Polish company.  The Philharmonic Hall was opened in September 2014. During the opening ceremony, Mr. Bronisław Komorowski, the President of Poland, was, among others, delivering a speech; and called the Philharmonic a symbol of Polish freedom. It enables concerts to be arranged on a big European level; so, despite its short history, numerous outstanding bands from our continent have been coming there. The main reason for starting the Philharmonic Hall was to improve the quality of cultural life in the region. The building is modern and yet majestic, and its erection was not unnoticed throughout Poland. The interior of the philharmonic hall is primarily impressive.