Turkusowe Lake
Turkusowe Lake was formed on the site of a former chalk pit. A Portland cement factory, founded by Johannes Quistorp in 1829, operated in the nearb...
08-04-2015 ·

The Kasprowicz Park
The present Jan Kasprowicz Park was established in 1900 as “Quistorp Park” in honour of Johannes Quistorp, a philanthropist and entrepreneur from S...
27-04-2015 ·

The Sports and Entertainment Hall
The building has two floors; the ground floor consists of a hall, a cloakroom for spectators, locker rooms with bathrooms for players. The fir...
29-04-2015 ·

The Co-Cathedral Basilica
When the town became established in a new place after its foundation in 1255, a construction of a large church started at the end of the 13th...
10-05-2015 ·

The stadium of LKS Sparta Węgorzyno
The stadium belongs to the LKS Węgorzyno sports club. It has a natural grass surface, capacity of about 2100 people (room for 300 people stand...
12-03-2015 ·
Mount Chełmska 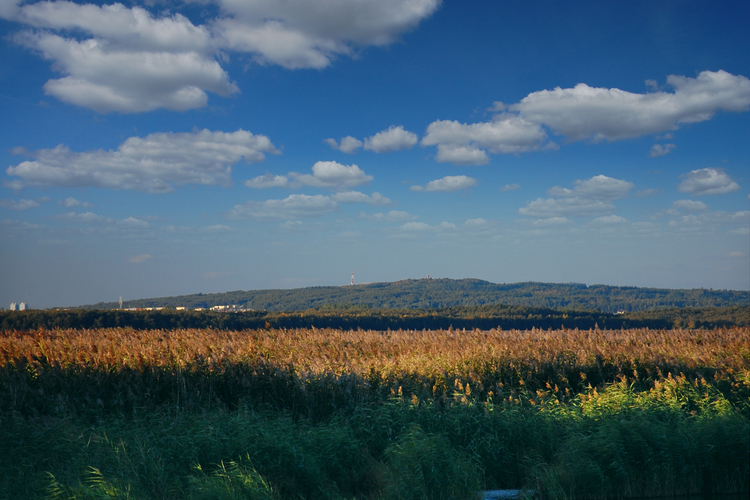 The massif of Mount Chełmska is located to the east of Koszalin. Going from the city centre, one needs to go eastwards along Zwycięstwa Street. Then, one needs to turn left into Pileckiego Street, and immediately right into Piłsudskiego Street. One has to go up the latter, straight ahead. After entering a forest Piłsudskiego street changes into Słupska Street. Having reached the hill top, the car is to be left in a car park located to the left of the road. One has to cover several hundred meters on foot, also on the left side of the road. First, the building of a sanctuary will be seen, then – an observational tower. In the summertime, the spot can be reached by bus line no 23 (mzk.koszalin.pl). The top can be reached on foot from the northern part of the city, from the stadium of the Gwardia sports club and the Przylesie housing estate. The walk takes about 30-40 minutes.

Mount Chełmska is an embankment of a frontal moraine formed in the Quaternary Period. Its highest point is Krzyżanka (136.2 m above sea level). Other tops are Krzywogóra (133 m), Leśnica (118.5 m), and Lisica (25.9 m). Due to the fact that Mount Chełmska is the highest elevation in the vicinity, it used to be a place of worship for the peoples of the Lusatian and Pomeranian cultures. Apart from carrying out rituals, its slopes were places for burying people. Since the 13th century, the hill became a place of Christian cult. In 1214, Mount Chełmska was handed over to the Norbertine Order by the strength of an act issued by Duke Bogusław II. Prior to 1217, the first church was built. The Blessed Virgin Mary church functioned as a parish church since 1278. Later, the area was taken over by the Cistercian nuns. At the turn of the 14th and the 15th century, Mount Chełmska became one of the most important pilgrimage and pardon places in Pomerania.

Because of the increased pilgrims’ traffic, the construction of a larger church was started in 1431. It did not served the believers long, because in 1534 Protestantism became an official religion of the Duchy of Pomerania under the assembly of the estates in Trzebiatów. The Blessed Virgin Mary chapel was pulled down. A Catholic church returned Mount Chełmska not earlier than in 1990. Previously, in the years 1959-62 and 1986-87, the hill was a place of archaeological works, which revealed the walls of the chapel from the 13th century and the church from the 15th century, as well as early mediaeval burial ground. Currently, Mount Chełmska is a place where the Sanctuary of Mother Thrice Admirable Madonna, managed by the Schoenstatt Sisters. The chapel was consecrated on June 1st, 1991 by Pope John Paul II. In the sanctuary, there is a painting of the Blessed Virgin Mary entitled “Mother Thrice Admirable Madonna”. It is a replica of a painting located in the sanctuary in Schoenstatt. The following monuments are located near the sanctuary: monument of the November insurgents – the builders of the road through Mount Chełmska, a monument commemorating the visit of Pope John Paul II, a plaque with the words of the Pope, and a monument commemorating Lech Kaczyński and Ryszard Kaczorowski.

At the top of Krzyżanka, in 1888, a tower was built. It enables tourists to admire the view of Koszalin and the sea located 8 kilometres away. The building is 31.5 metres high. Along with the tower a restaurant-café complex was built. It was pulled down in the 1960s. After long-lasting trials and tribulations connected with a renovation, the tower was re-opened to the public in 2012. Since then, it became an extremely popular place of excursions. A camera was installed on the viewing deck (www.sanktuarium-koszalin.pl/index.php/wieza-widokowa/11-wieza-widokowa).

Nearby the tower, there is a roofed shelter and a catering point.

On the southern part of the hill, there is the “Góra Chełmska” Radio and Television Broadcast Centre.