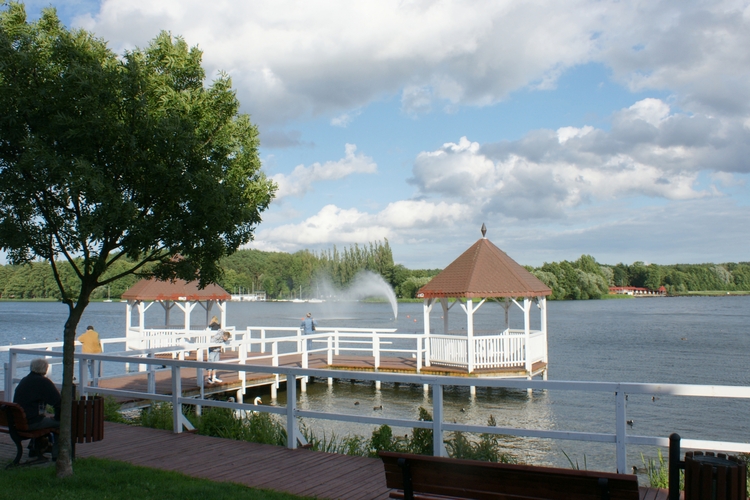 On the northern coast of the lake the capital of the municipality is located, and on the south-eastern coast there is Moczkowo. The lake is situated within Barlinek-Gorzów Landscape Park.

Barlinek Lake has a surface area of 250 ha and it is situated in Barlinek-Gorzów Landscape Park and Ostoja Barlinecka – an area protected by Natura 2000. The average depth of the lake is 7.1 m, while the maximum depth is 18 m. It is supplied by numerous streams and watercourses, and its water has cleanliness class 2.

Besides the northern coast, where Barlinek is located, the lake is surrounded by picturesque forests, mainly deciduous trees, such as beech and oak trees. The coasts of Barlinek Lake are mostly high, sometime even precipitous. There are four islands on the lake: Łabędzia [Swan’s], Sowia [Owl’s], Nadziei [Hope’s] and Zielona [Green]. However they are not available for tourists, as there are numerous birds living there.

In Barlinek, on the north-eastern coast of the lake, at Sportowa Street there is a large public beach with a campsite and a bathing area with a historic building of the guesthouse “Pod Sosnami” [“Under the Pines”] from 1927 maintained in the Alpine-style. Views from the jetty encourage long walks. Apart from this, in the town and outside of it there are numerous wild beaches on the coast of the lake. There are also places to tie up your boat. Water equipment can be rented among others in the “Sztorm” TKKF Sailing Club, which offers cruises by sailboats with a crew. There are forests with numerous mushrooms on the southern coast of the lake.

Besides spending time on the beach and water sports, on Barlinek Lake it is also possible to fish. You can catch perch, eel, roach, bream and pike. There is also wels catfish. It is prohibited to use motorized boats, however in rental offices boats without engines are available. It is rather difficult to fish from the coast as there is a wide line of reed beds. However at night it is only possible to fish from the coast.

It is worth mentioning a legend about a floater from Barlinek Lake which tells a tragic story of a beautiful woman banished from Barlinek with a new-born baby. In winter the desperate woman entered the lake and she disappeared. Then she returned to the earth as a vengeful water nymph. She lured her victims using the cry of a child and then she pulled them into the lake. When people started to avoid the surrounding of the lake after dark, she started to go further towards the town, from which she kidnapped children, especially those really living with their parents. However, time heals wounds and also it healed the water nymph who finally fell in love with one of the kidnapped babies and let her live. One day the girl left the water nymph, as she wanted to get to know the world. In order to protect the child from suffering and evil the water nymph transformed the girl into a stone and hid at the bottom of the deepest point of the lake. She will disenchant her only when she finds a way to ensure her happiness outside her water home.

Now, the water nymph walks around and thinks how to find happiness. You can come across her at the full moon at midnight – she has fins instead of feet, so you can hear her splashing in the shallows. She disappears when it is starting to get light. She stops at every bridge, but she spends most of the time under the railway bridge at Kasztanowa Avenue. There she arranges branches, splashes water and collects chestnuts. If somebody walks across the bridge at midnight and does not wish to see her, they need to throw a chestnut into the water to distract her.