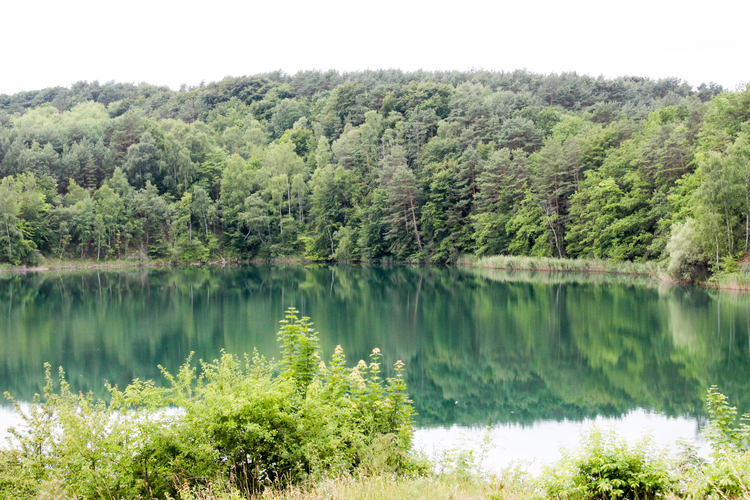 Turkusowe Lake is located on the Isle of Wolin, within Wolin National Park. It is located in the south of the village of Wapnica, in the commune of Międzyzdroje, in the district of Kamień. The easiest way to get there from Międzyzdroje is to head southwards towards the town of Lubin. You reach Wapnica by Nadbrzeżna Street, where you turn left into Turkusowa Street. There is a large car park prepared for tourists visiting the reservoir. The charges are levied from 1st May to 30th September. You can also take a trip along the blue walking trail called "Nad Bałtykiem i Zalewem Szczecińskim" ['By the Baltic Sea and the Szczecin Lagoon'], leading from the gate of Wolin National Park in Międzyzdroje to Turkusowe Lake, and farther towards the cliffs in the Szczecin Lagoon.

Turkusowe Lake was formed on the site of a former chalk pit. A Portland cement factory, founded by Johannes Quistorp in 1829, operated in the nearby town of Lubin. Local raw material, exploited to a great extent, was used. The Russians dismantled mining equipment after World War II, and the pit slowly began to be filled with water. The mine resumed work in 1948. Due to the difficulties in obtaining chalk in 1954, mining operations were finally ended. It was then that the ground and rain waters began to fill the basin of the pit again. The water level reached this of the Szczecin Lagoon c. 1960.

The lake covers an area of ​​6.7 hectares and is the largest one in Wolin National Park. It reaches a maximum depth of 21.2 m. The phenomenon of pseudo-depression occurs there. The reservoir bed is, in fact, below sea level (18.6 m). The waters of the basin take specific turquoise colour, hence the name of the lake [turquoise is turkusowy in Polish]. This colour is created by the reflection of sunlight in the water containing calcium carbonate compounds and white limestone reservoir bed.

The lake is surrounded by the Wapno-Lubin Hills, mostly covered with beech. It is worth taking a walk around the lake and start from the vantage point near the car park. Behind a wooden gate, there is a large deck fenced with a balustrade, with a panoramic view of the turquoise waters of the lake surrounded by steep banks of the old workings. In case it rains, You can hide under the carport. Near the deck and the car park, a hungry tourist will find the eating place. In addition, You go to the viewpoint on Piaskowa Mount. You can admire there a view of the reservoir, beautifully situated Wapnica, the Trzciągowo Valley, the Wyżnica Range, Wicko Małe Lake and on a fragment of the Świna reverse delta.

The reservoir can only be admired by walking around it. Any other forms of activity are forbidden, which means that no one can swim, fish, or dive. Nevertheless, it is worth seeing the amazing colours of Turkusowe Lake and stay for a while in this amazing place.