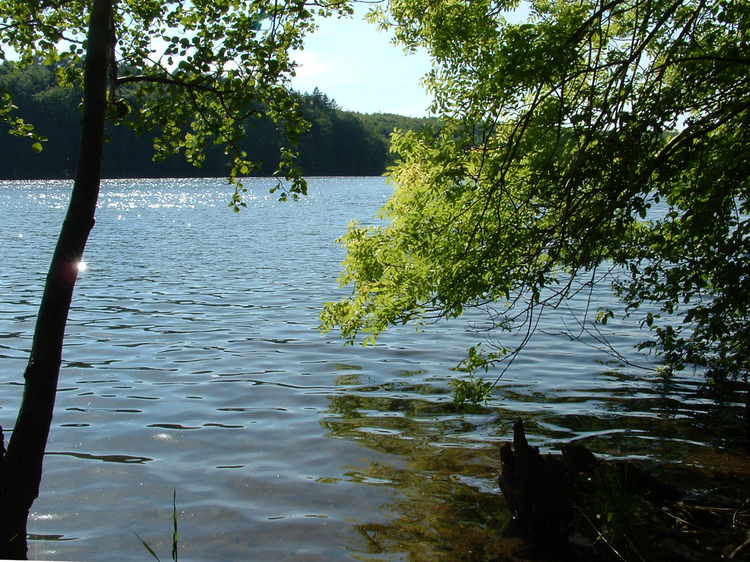 Lake Kamienica is located at the border of the communes of Gościno and Siemyśl, in the district of Kołobrzeg. The lake is situated on the Gryfice Plain, in the reception basin of the Błotnica River, which flows out of the lake. The only settlement on the lake is Dargocice, located on the eastern shore of the reservoir. The easiest way to reach the lake is driving along regional road no 162 from Gościno towards Kamica and Trzynik or from Wartkowo to Dargocice.

Lake Kamienica (the area of 65 ha) is a post-glacial finger lake. It stretches meridionally and is about 2.5 km long. The width of the lake oscillates between 400 and 500 m. The average depth amounts to 5.9 m, and in the lowest point, it is 12.2 m deep. The shoreline is very diverse. It consists of both flat banks and steep elevations and escarpments. Lake Kamienica is surrounded by woods, mostly beech forests, abundant in mushrooms and berries. At least 13 protected plant species (including deer fern, heath spotted-orchid, and European honeysuckle in great numbers) and more than 20 rare and endangered species (including Belgian gagea, lesser hairy-brome, wood speedwell, and columbine meadow-rue) can be found there. In the lake, water plants can be found, for instance clasping-leaf pondweed and Canadian waterweed, which is an invasive species. The reeds growing on the shores also have rich vegetation. The most interesting species include water horsetail and common spike-rush. The lake is also a habitat of fish, such as breams, tenches, pikes, roaches, perches, rudds, ruffs, or bleaks. Also, among birds that have their nesting grounds on the lake are great crested grebes, mute swans, mallards, pochards, tufted ducks, goldeneyes, mergansers, black kites, and coots. The Błotnica River, which flows out of Lake Kamienica, flows into Lake Resko Przymorskie.

A holiday resort is situated from Dargocice. It offers accommodation and water sports equipment rental service. It has to be remembered, though, that there is a year-round prohibition on the use of recreational vessels powered with combustion engines, practising water sports and amateur fishing. Anglers, however, can use boats, as well as numerous platforms and footbridges.

Lake Kamienica has its own legend. According to it, once there was a rich town there, governed by a mayor. He insisted his daughter should go to the altar along the way strewn with bread crumbs. The girl was frightened, but her father did not want to resign from this sacrilegious idea. God got angry and sent a downpour of rain on the town. Water flooded everything, including a church tower. When the Easter is coming, it is said that the toll of the church bell can be heard. And during one day in the year, though it is not known exactly which one, the level of the water in the lake is so low that the top of the church tower can be seen.