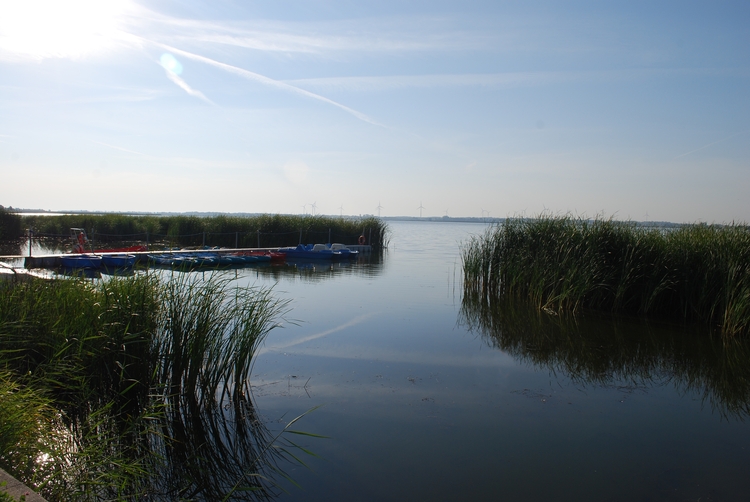 Lake Resko Przymorskie is located in the commune of Trzebiatów, the district of Gryfice and the commune of Kołobrzeg, the district of Kołobrzeg. It is situated in the eastern part of the Trzebiatów Coast mesoregion, between the estuaries of the Rega and Parsęta Rivers. On the western side, there is the town of Rogowo, on the eastern – Dźwirzyno. The easiest way to the lake is to drive the road along the coast from Mrzeżyno to Kołobrzeg. The lake is a part of the Natura 2000 “Trzebiatowsko-Kołobrzeski Pas Nadmorski” and “Wybrzeże Trzebiatowskie” zones.

Lake Resko Przymorskie, as the very name suggests (“Przymorskie” means “located near the sea”), is a seaside reservoir. The name “Resko” refers to the Rega River, which used to flow into the lake, and only then to the sea through a strait. The reservoir was created by cutting off a sea bay by a sand bar resulting from accumulative activity of the sea. The width of the sand bar, extended by a seaside dune embankment, oscillates from 0.3 to 1 km. The height of the dunes amounts to 16 m above sea level. According to different sources, the area of the lake is between 554 ha and 669 ha. Such large differences can be put down to the variability of the lake’s water level. The lake is connected with the sea by a strait created during a week-long storm in 1497. The direction and strength of wind influence the water level of Lake Resko Przymorskie. Within 24 hours, the waters of the lake can raise by 0.5 m; during longer storms even by 1.5 m.

The lake has a complex shape and is characterized by a shoreline developed better than in other seaside lakes. The Błotnica, Łużanka, and Stara Rega Rivers, as well as a small watercourse called a tributary from Gosław flow into the lake. Rushes and vast reeds cut across by a network of drainage ditches are located on the eastern, southern, and westerns shores. Reeds and cattails grow there. The northern embankment of the sand bar is covered with a forest. Impenetrable reed shores are a paradise for water birds. 13 breeding species, including 4 endangered ones (greylag goose, common goldeneye, bearded reedling, and red-backed shrike) have been observed there. Apart from these, one can found there grebes, coots, seagulls, ducks, and species rare in Poland – cranes, little gulls, and lesser black-backed gulls. The reservoir and its surroundings are a breeding place of amphibians, reptiles, and mammals. The waters of the lake are inhabited by fish, such as breams, roaches, pikes, European eels, perches, pike perches, tenches, rudds, and bleaks.

From the first half of the 20th century till 2001, the lake was not available to civilians, because the area was occupied by the army. Currently, there are two holiday resorts in Rogowo. In Dźwirzyno, there is the Stanica Wodna resort with a harbour and a water equipment rental service. Due to winds blowing from the sea, it is a paradise for the enthusiasts of windsurfing and kitesurfing. Apart from that, it is worth using the network of biking trails. The international Baltic Sea Cycle Route, a part of the EuroVelo network, leads through the sand bar along a district road. Moreover, there is a trail around the Lake Resko Przymorskie, as well as the “Ku Słońcu” [Towards the Sun] nature and history biking trail on the eastern side of the lake.

More on the topic:
Geolocation
Search nearby
Lake Resko Przymorskie
COMMENTS
Sign in to leave a comment.