The Promenade
The promenade is a pre-war boulevard that used to separate the beach from the health resort area. Currently, it is a bit inland. Nowadays, the Promena...
20-09-2021 ·

Fontanna Wielkiego Raka [Great Crayfish Fountain] in Moryń
Great Crayfish is a fictional character from a town legend, which is more than 300 years old. The German residents of the town used to tell the story...
20-09-2021 ·

The Co-Cathedral Basilica
When the town became established in a new place after its foundation in 1255, a construction of a large church started at the end of the 13th...
30-04-2015 ·

The Jan Sobieski Długi Bridge
The first bridge crossing in the place where the present Długi Bridge is located was established in 1283. It was built to replace a ferry crossing....
22-05-2015 ·

Tennis courts
The clay courts comprise four courts, including three for doubles matches and one for singles matches. The court also features a practice wall. The...
22-04-2015 · 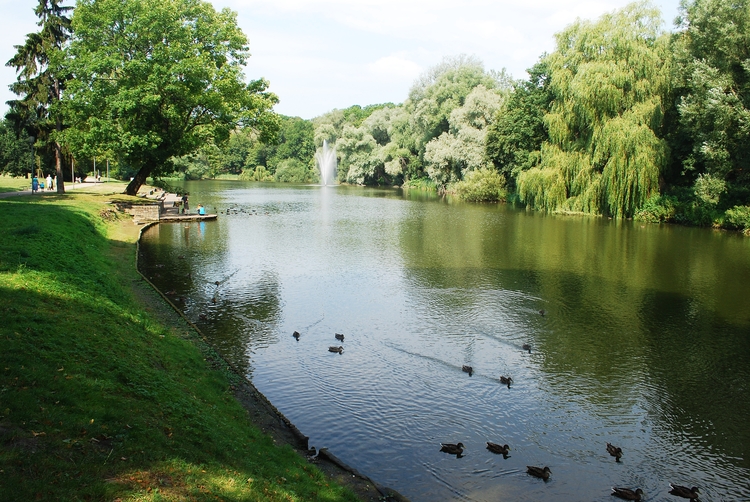 Lake Rusałka is located in Kasprowicz Park on the edge of Łękno and Niebuszewo districts in the Niemierzyn Valley. You can get to the lake by public buses No. 53 and 60 (the Słowackiego stop). The easiest way to get there by car from the centre is to head for Niebuszewo to the end of Wyzwolenia Avenue, then turn left at Słowackiego Street. You can leave your car along Słowackiego Street or at Żupańskiego Street which turns to the right.

Lake Rusałka is an artificial reservoir of elongated shape, formed in the Middle Ages as a result of damming up the Osówka flowing there. This was due to two water mills which were constructed in such a way that ended up on the lake as a result of their work. These were the Lübsche Mill (now non-existent) positioned on the western shore and the Słodowy [Malt] Mill (in the eastern part of the lake). The land surrounding the lake was transformed into a park in 1900 (the today's Kasprowicz Park) and the Słodowy Mill was converted into a restaurant Haus am Westendsee (from the German name of Lake Westendsee). There is also a picturesque bridge with annexes in a Japanese style over the lake. The lake was full of boats, which could be rented in the summer, but was a popular ice-skating rink in the winter. The buildings, intact after the hostilities of World War II, gradually began to fall into disrepair. The mill and its turrets on the banks of the bridge were demolished in the 1960s. An amphitheatre (the Helena Majdaniec Summer Theatre) was built in the years 1974 - 1976 on the slope descending to Lake Rusałka. Currently, the shores of Lake Rusałka are still a popular place for walks of the residents of Szczecin.

More on the topic:
Weather
Geolocation
Search nearby
Lake Rusałka
COMMENTS
Sign in to leave a comment.