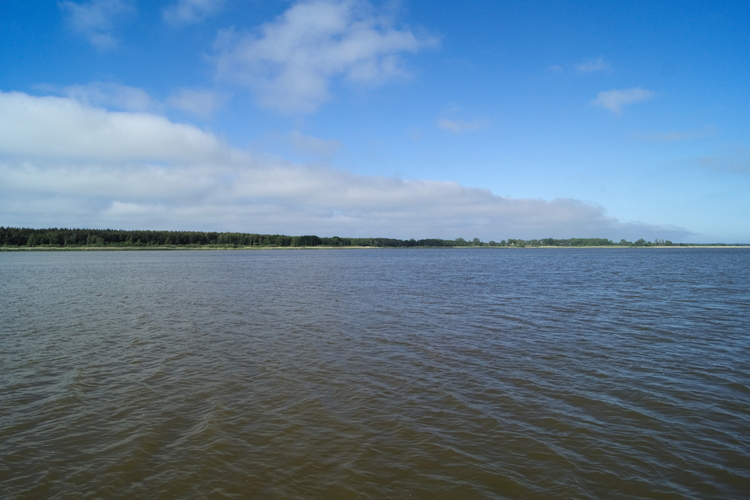 Wicko Lake is a littoral lake on the Słowińskie Coast. It is the largest lake in the Postomino municipality in the Sławno County. It used to be a sea bay. Currently from the Baltic Sea it is separated with a spit with wooded dunes up to 40 m height. The spit and the Baltic beach – east from Jarosławiec – are generally inaccessible for tourists due to a military training ground located there (special permits are necessary). The lake is 5.1 km long and 3.7 km wide. Its maximum depth is 6.1 m and the average depth is 2.7 m. It is supplied by the following waterways: Klasztorna, Świdnik, Marszewka and the Główniczka canal. The lake is divided into two parts: western (smaller) and eastern. The division point is an isthmus between two peninsulas. A shallow strait created this way is strewn with underwater boulders – one of them protrudes above the surface of the water. On the lake there are four lookout piers, two in Jezierzany, one in Łąsko and in Królewie. It is also possible to moor boats there. They are the most beneficial places to admire nature of the area. You can also sail on the lake. You can go fishing, although on the western side it is forbidden to go boat fishing. There are zander, pike, tench, catfish, perch, roach, bream and eel. Wicko Lake is a shallow lake, prone to degradation and it is subject to accelerated eutrophication. The lake constitutes a part of the protected landscape “Embankment Zone West from Ustka”.