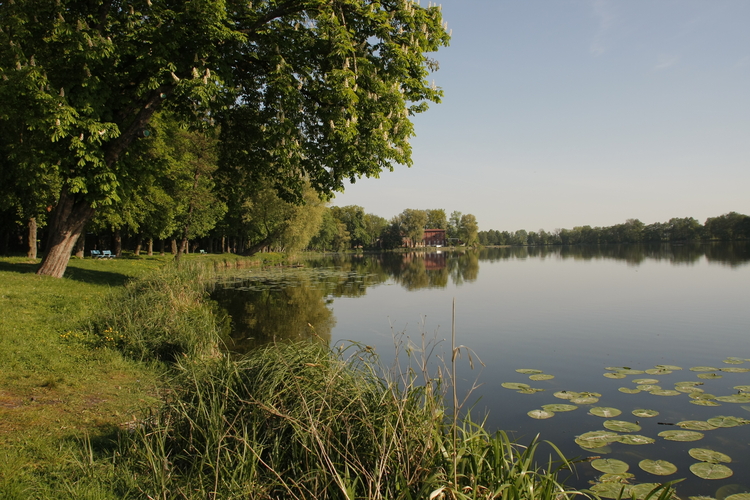 Lake Miejskie is located within the town of Trzcińsko-Zdrój in the district of Gryfino. The western shore of the lake is adjacent to the town. It is one of the lakes of the Myślibórz Lakeland.

Lake Miejskie has the area of 43.6 ha. It is a shallow body of water with maximum depth amounting 5.6 m only. The water in the lake is classified as Class 3 water. Lake Miejskie is also known under two other names: Lake Trzcińskie, because of the town where it is situated, and Lake Trzygłowskie, which name is explained by a legend. According to the legend, once upon a time, there was a Slavic tribe known as the Licikaviki, who lived in this area. The members of the tribe worshipped a god named Trzygław, who warned them against any danger by appearing over the lake and scaring enemies away. The inhabitants paid homage to him in a temple on an island, where a wooden statue of Trzygław was located. When Christianity reached this region, Trzygław left the lake, leaving a lasting trace in a form of a characteristic shoreline that resembles three heads of the god. That is the end of the legend, which is very popular in other parts of West Pomerania.

Near the lakeshore, in one of peninsulas, there is a building of the Spa House. In the late 19th century, a local physician named Boding found there deposits of peat bog with high contents of mineral components, especially iron and sulphur. Due to his initiative, the first watering place was established, and then a medical establishment was set up. Patients came there from all over the Europe, and a word “Zdrój” [Spa] was added to the town’s name. After the Second World War, the medical establishment was closed due to nearby location of the Soviet military airport in Chojna. Only the name of the town reminds about the resort.

Lake Miejskie is a typical post-glacial ribbon lake, but it consists of two parts. One of them spreads longitudinally; the second is perpendicular to it and spreads latitudinally. Due to such a shape, the lake offers very good conditions to practice water sports using wind force. Wind is going to blow from right direction. The lake is also a great place for canoeing. Two rivers flow through the lake - Rurzyca and Tywa. One may go canoeing, but it is important to remember that waterways are full of obstacles here. Anglers can find many places and bridges which are perfect for fishing.