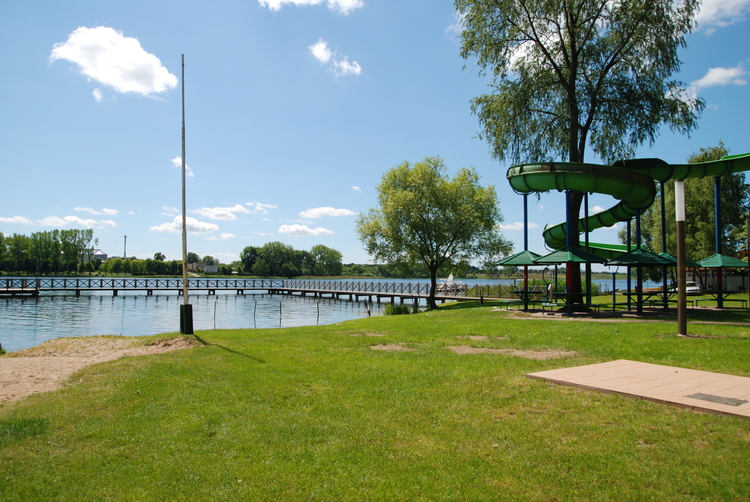 Nowogard Lake lies in the Goleniów County in the commune of Nowogard. A town of the same name lies on the coast of the lake.

In the vicinity of the lake, to the north west, there is the national road no. 6 which overlaps with European route E28 in the region. The road leads to, among others, Nowogard. You can reach the town by following the signs.

The lake can be reached from the town centre by Promenada Street which runs alongside its northern coast. At the end of the street in the west there is a Landscape and Nature Complex ‘Sarni Las’ [Roe Deer Forest]. Zielona Street runs alongside the south coast of Nowogard Lake.

Nowogard Lake is a relatively small body of water which covers a total area of 112 ha. The lake is fed by the Gowienica River. The average depth of the lake is 5 m. The lake is a great place for anglers and water sports enthusiasts. The anglers may indulge in their hobby on numerous fishing stands where they can catch, e.g. roach, carp, bream, pike and wels catfish. The admirers of rare fauna and flora should visit the Landscape and Nature Complex ‘Sarni Las’ [Roe Deer Forest] situated on the northern coast of the lake.

At the lake, at Promenada Street there is a sports and recreation centre with a beach equipped with a 70 metre long water slide, with a lifeguard on duty. Moreover, the centre offers a camping site and summer cabins for rent. The enthusiasts of active rest may benefit from water sports equipment rental: there are kayaks, pedaloes and boats. At the same street there is a diving centre.

On the other side of the lake, at Zielona Street which runs alongside the south coast, there are accommodation facilities, restaurants and a large car park.

The quality of the water in the lake is examined every year by the Sanitary Inspectorate and the information on swimming prohibition / permission is published on the website: www.wnowogardzie.pl.