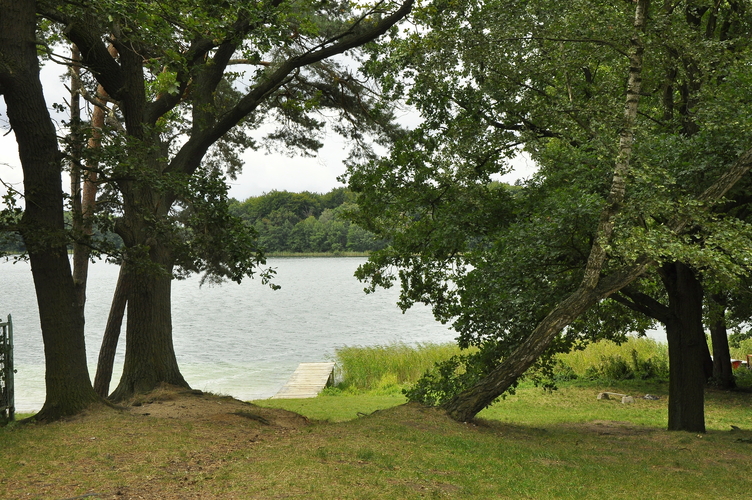 Chłop Lake is located in the western part of Osetna near Lipiany in Pyrzyce country, the Lipiany municipality. You can get to the lake from Osetna, where an unguarded bathing area is located.

The surface area of the lake is 326.7 ha. The lake has an irregular shape. Due to its natural advantages, Chłop Lake is very valuable. The surface of the lake is transparent and the water is clean. Around the lake there are common reed beds, including common club-rush or cane. A rare specimen, growing on the northern coast of the lake, is cladium mariscus, which occurs in large groups. On the right side, near the bathing area, there is mainly ranunculetum circinati. Some time ago there was a jetty and a brick barbecue, currently there is only a narrow lea available for beach lovers. The jetty was demolished in 2012.

There is a legend related to the lake. It says that once shepherds of the lords from Derczewo could gaze sheep in the fields of Lipiany. The shepherds had to walk around the lake located between Derczewo and Lipiany with the animals. They dreamed about building a bridge in the narrowest point of the lake to make the crossing quicker. One day during one of their journeys, a storm struck and it started to rain heavily. A scared and freezing shepherd started to call for help and declared that he would give up his soul for safe crossing. When he said that, the devil immediately appeared, as he has always been willing to take human souls. He promised to build a bridge in exchange for the shepherd’s soul. The shepherd got frightened, refused giving up his soul and he went home. When he fell asleep, the devil visited him and reminded him of the transaction. The shepherd tried to wriggle out of the agreement, saying that he had nothing to sign the document with. The devil cut the shepherd’s fingertip and signed the agreement with his blood. In exchange for the soul the devil was supposed to build a dike on Saturday night before the rooster’s crowing. The shepherd was convinced that it is not possible for the devil himself, so he agreed. However, he started to feel anxious and together with his wife, they started to think how to fool the devil and save his soul. They went to observe the devil working at night. He was bringing sand and building the dike. When there was only the last pile of sand for the devil to carry, he heard the rooster’s crowing. Angry that he was not able to execute the agreement and lost the soul, he escaped, and the shepherd saved his soul – but not thanks to the fact that the rooster woke up early, but thanks to his wife who was smart enough to imitate the rooster’s crowing. The island created by the devil was called “Śliwkowa Wyspa” [Plums’ Island].