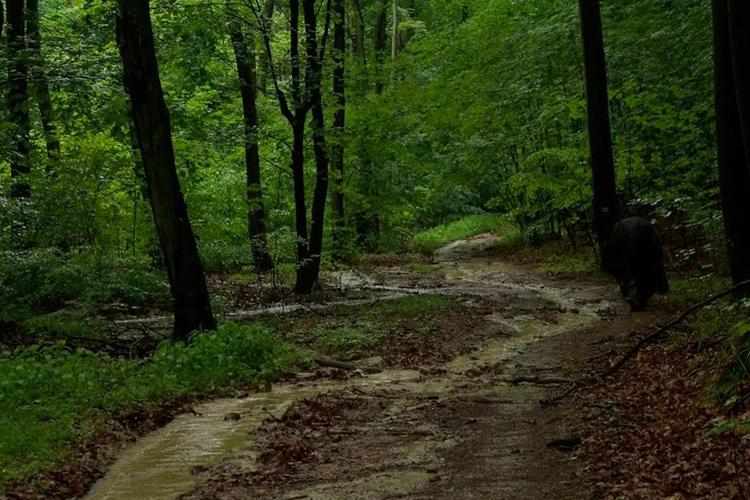 The Szczecin Landscape Park Puszcza Bukowa was established by Resolution No. IX 55/81 of the Provincial Council in Szczecin on 4th November 1981. But the history of the protection of this area is much longer. What was established there in 1940 was Landschaftschutzgebiet. The first nature reserves, among other things, Bukowe Zdroje [the Beech Waters] and the Kołowskie Parowy [the Kołów Ravines]. Steps to create a landscape park were taken in the 1970s, which did not end until 1981. The park covers an area of ​​9096 hectares, including 6742 hectares of forest and forest land, as well as 1,616 hectares of farmland at: the Binowo Clearing, the Kołowo Clearing and the Dobropole Clearing, and between the southern border of forests and Glinna Lake, Leniwe Lake and Dereń Lake. There is a Forest Park 'Zdroje' with Szmaragdowe Lake. Currently, there are 7 reserves: Buczynowe Wąwozy [the Beech Gorges], Bukowe Zdroje [Beech Baths], Kołowskie Parowy [the Kołowo Ravines], Osetno, Trawiasta Buczyna [the Grassy Beech Forest], Zdroje [the Baths] and Źródliskowa Buczyna [the Beech Headwaters]. Puszcza Bukowa [the Beech Forest] grows on glacial moraine called Wzgorza Bukowe [the Beech Hills]. The highest peak is Bukowiec Mount with a height of 148.4 m above sea level. Height differences can approx. 100 m. The specific geological structure means that there are many springs, watercourses and disappearing streams (the Ponikwa, the Utrata). Landscape is dotted with meandering streams such as the Chojnówka or the Rudzianka, depressions filled with water or peat, as well as picturesque lakes such as Glinna Lake, Binowskie Lake, or Piasecznik Wielki Lake.

Puszcza Bukowa [the Beech Forest] has a very interesting mosaic of habitats, resulting from the varied terrain. It is dominated by forests, mostly beech ones, but also riparian, alder and oak forest occupy large areas. Besides, You can find there very interesting, sometimes also extremely rare, marsh plants on the peat bogs, water plants in the lakes and meadow plants on the slopes and in river valleys. It is also interesting that mushrooms, for example giant puffball, coral tooth, cauliflower mushroom, or parasitic bolete are also protected. One of the first mycological (protecting fungi) reserves in Poland, Osetno, was founded in the Park in 2008. Various habitats means suitable refuges for animals. Among the larger mammals, You can encounter deer, wild boar and roe. Several species of birds of prey such as white-tailed eagle, lesser spotted eagle, red kite, marsh harrier have their breeding grounds there.

It is worth taking a walk or going on a bike ride on one of the numerous trails created in the Szczecin Landscape Park. Nor can You overlook the Dendrological Garden in Glinna and Szmaragdowe Lake that formed itself in an old chalk and marl mine workings. The city of Szczecin and the small villages scattered in Puszcza Bukowa also offer a lot of attractions.

Geolocation
Search nearby
The Szczecin Landscape Park "Puszcza Bukowa" ['the Beech Forest']
COMMENTS
Sign in to leave a comment.