Mysia Wyspa [the Mouse Island]
Mysia Wyspa is a perfect destination for a successful trip out of town. The peninsula of Lake Trzesiecko can be reached in many ways, using interestin...
05-10-2021 ·

Prom Bez Granic [“Borderless” ferry]
Prom Bez Granic, which was opened in 2007, is the first, ferry border crossing on the Oder River. The ferry swims between the following places: G...
20-09-2021 ·

The Orlik playing field
The playing field was established as a part of the “Moje Boisko - Orlik 2012” project. It consists of two playing fields which can be used to pla...
20-09-2021 ·

The City Fortifications
The city fortifications were built at the turn of the 14th and the 15th century. To this day only fragments thereof have been preserved. They are m...
30-04-2015 ·

Sportowa Dolina [Sports Valley]
Sportowa Dolina in Koszalin is a modern sports and recreation complex, situated in the city centre, intended for everyone regardless of age. It was...
15-09-2016 ·

Pałac Młynarza [Miller’s Palace] and a mill
The first mill was built in this place in the 13th century in connection with granting a town charter to Koszalin in 1266. The complex survived unt...
11-10-2015 ·

The Museum
The prototype of the Koszalin museum was the exhibition of the German Tourism and Protection of the Country Association opened in 1912 in the city...
23-05-2015 ·

The Dutch Windmill
The Dutch windmill comes from the mid-19th century. Due to the condition of the building, it is not open to visitors. This type of wind-propelled m...
06-01-2015 ·
The Kasprowicz Park
Szczecin
Home / Discover / Nature / Municipal gardens and forests parks 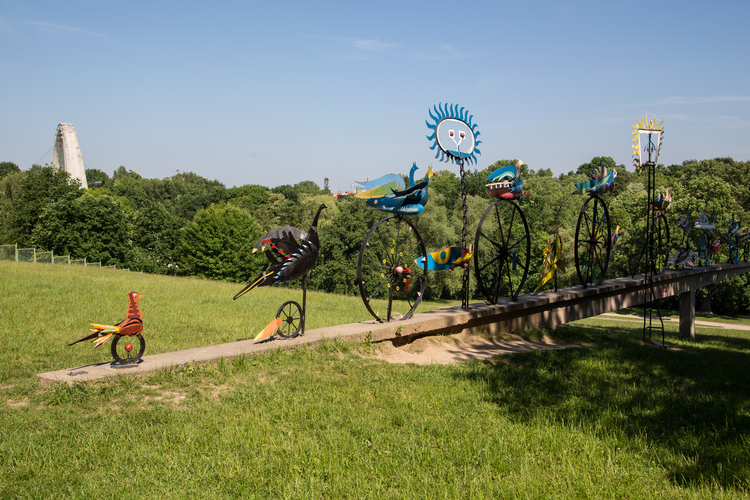 The Jan Kasprowicz Park can be reached using buses no. 53 and 60, which will take us to the “Słowackiego” or “Teatr Letni” stops – both are located in the vicinity of the park. We can also take bus no. 67, which stops on the “Jasne Błonia” stop and walk through this square towards the Jan Kasprowicz Park.

The park is located on a slope of the Niemierzyn Valley and is a fragment of a green complex connected with the Wkrzańska Forest that is situated nearby. The park is located between Słowackiego, Skargi, Zaleskiego, and Wyspiańskiego Street and covers the area of about 50 ha.

The present Jan Kasprowicz Park was established in 1900 as “Quistorp Park” in honour of Johannes Quistorp, a philanthropist and entrepreneur from Szczecin, who handed the neighbouring areas – the Jasne Błonia Square and the Arkona Forest – over to the city.

Quistorp was the proprietor of a Portland cement factory and the “Westend” construction company; it was he who initiated the creation of a new district called Neu-West-End. In the late 19th century, the entrepreneur prepared an urban arrangement, in which he took into consideration the presence of a large green complex that would be incorporated into a villa district. Quistorp consistently carried out his plan by creating a unique strip of green which was located in the centre of a large city, and through which it was possible to walk to forest located nearby.

Officially, the park was handed over to the city in 1908. Previously, in 1885 – due the damming of the Osówka River – Lake Rusałka was created. During spring and summertime, one could row a boat on the lake, in winter it would turn into a skating rink. Furthermore, there were restaurants established, a bridge over Rusałka was built, fountains and sculptures were located in the park. Also a toboggan run, a concert site, a beer and milk hall, and a children’s playground were built there. In 1915, right on the lakeshore, in an old malt mill a very popular restaurant was opened.

Until the Second World War, the complex established by Quistorp was extremely attractive to tourists and the inhabitants of Szczecin. This attractiveness was raised by exotic species of trees and bushes collected from various parts of the world – some of them have been preserved up to the present day.

Within the area of the park, we can find more than 200 species of trees and bushes. Apart from trees that are well-known in Poland, such as horse chestnuts, beeches, willows or oaks, we can found mountain pine, western yellow pine, Jeffrey pine, Serbian spruce, American hornbeam, Tatar maple, Persian ironwood, Brewer’s spruce, manna ash, and common lime. Moreover, in the Jan Kasprowicz Park we can find the only North American Garden in Europe. The park enjoys great popularity among bikers – after all, it is here where we can find the fragment of the oldest cycling path in the entire Central Europe.

After the Second World War, the complex, which since 1945 has been called Jan Kasprowicz Park, was somewhat neglected. It was necessary to pull down the malt mill, where the restaurant was located; also, a so-called Japanese bridge was dismantled.

In the second half of the 1970s, it was decided to build an amphitheatre for about 4.5 thousand spectators. The structure is called the Helena Majdaniec Summer Theatre. Nearby the theatre there is a sculpture called “fire birds”, which was made by Władysław Hasior. In 1979, the monument of the Poles’ Deed by Gustaw Zemła was exhibited in the park. In the furthest end of the park, there is a so-called Różanka – a rose garden that was renovated in 2007. What is more, recently the park lighting has been refurbished and several small catering spots have been opened. There is also a plan to open a restaurant in the park.

The Jan Kasprowicz has been entered into the provincial register of historic monuments in December 1994.