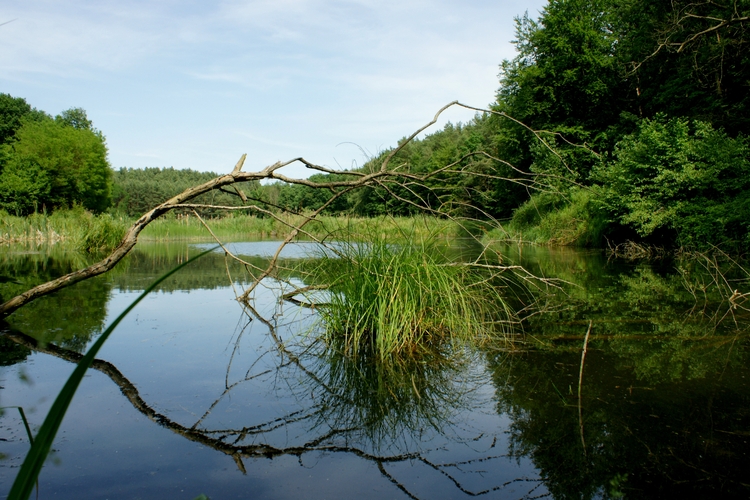 Drawa National Park with the area of ​​its buffer zone lies in the areas of 3 provinces, the largest of its parts is in the Lubuskie (55.91 ha) Province, the second and third largest correspondingly in the Zachodniopomorskie [West Pomerania] Province (54.72 hectares) and the Wielkopolska (3.78 ha) Province..

The aim of establishing Drawsko National Park was primarily to protect the natural environment for many endangered species of plants and protection of the animals inhabiting these lands.

The Park area was divided into 7 protective districts:

The area of the Park partially overlaps the areas where other forms of nature protection have been additionally established, which are the areas protected by the Natura 2000 project:

the Drawa Forest - a bird refuge.

In addition, the Park has marked out 12 strictly protected areas where no human activities are legally allowed to be performed, all natural processes take place there themselves. You can recognise these sites by blue bands on trees which separate these zones and by the stakes spaced there. They are: Przełom Drawy [the Drawa Gorge], Święta Hala, Moczele - Żeleźnica, Rynna Moczelska [the Mochele Tunnel Valley], Runica, Głodne Jeziorka, Wydrowe Łęgi, Pustelnik. Islands and peninsulas of Lake Ostrowieckie, the Płociczna Valley, Lake Czarne.

The area of ​​the Park is virtually all forested - the forests constitute 83% of the Park area. They are mostly beeches and oaks, but there are also pine groves. The remaining part of the park is waters and the unwooded land (glades, meadows, etc.) representing 8,5% each.

The area is botanically diverse to a great extent - there are more than 1,000 species of vascular plants, 55 of which are protected. The local ecosystem is rich in mosses (more than 200 species) and fungi (also more than 200 species). In addition, it is estimated to be 150 species of trees and shrubs, and more than 200 plant associations. The most valuable floristic specimens include: leatherleaf, small cranberry, saw-sedge, Turk's cap lily, wild service tree, sundews and many others.

Such floristic conditions are ideal for various animals. Birds are the leaders; they are the most numerous group of animals in terms of species - there are approx. 169 of them, and 151 of which are protected. The most important of these are: white-tailed eagle, osprey, eagle owl, common goldeneye, lesser spotted eagle, kingfisher, black stork, grey heron and many others.

Another group, in terms of the number of species, are mammals. The mammals inhabiting the Park are estimated to be approx. 42 species, 19 of which are protected. These are, among other things, red deer, roe deer, wild boar, raccoon dog, wolves, bats.

An important animal for the Park is the otter, which became a symbol of the park (the image is the logo).

The peculiarity of the animal world, amphibians found in the park to be precise, is pond turtle. It is the only turtle naturally occurring in Poland. Although the number is gradually decreasing, it is possible to encounter it in this area.

In addition to the turtle, which is most important amphibian, what can also mentioned are lizards (viviparous and sand lizards), blindworms, snakes (grass and smooth snakes) and adders (common European adder).

Reptiles are also numerous. in this area. The variety of reptiles includes probably representatives of all families because you can find there a number of frogs, toads as well as common spadefoot and fire-bellied toads.

The park is not only a wonderful flora and fauna, but also a unique water system. The park is located along the axis of two rivers - the Drawa and Płociczyna. In addition to these two major rivers and other smaller ones, there are 20 lakes of differing sizes, of which the largest reservoir is Lake Ostrowiec.

Speaking of water network in the Park, abundance of fish must be mentioned. There can be found e.g..: sea trout, trout, lavaret, vendace, bullhead, and many other quite popular fish.

A special attraction of the area is the most beautiful canoe trail in Poland, marked out along the entire length of the Drawa. The river is open to tourists from 1st January to 15th March and from 1st July to 31st December, from 9 a.m. to 7 p.m. The number of people who are on the river must not exceed 700 people along its entire length.

5 educational trails are also marked out, and you can recognise them by a special sign - a white square with a green Christmas tree. They differ in the length of the trail, the estimated time to reach their ends, and educational values:

Also, a geological path "Petrografia terenów nad Drwą" ['The petrography of the areas by the Drawa']. As the name suggests, it explains the geological conditions of the area, teaches how the area was shaped and what rocks are found there. The path is less than 4 km long, and it takes approx. 2 hours to cover the distance.

You can explore the park by the trails of such natures:

The trails are made open to tourists all year round from dawn to dusk. Hiking paths can also be used for people doing Nordic walking or cross-country skiing.

Please note that you can only camping in the designated areas, in other places it is prohibited. 6 of the above-mentioned are equipped with tables and benches, partially roofed. Depending on the point, the groups of 50 to 200 people can use them. They are open all days of the week, round the clock. After paying the relevant fees, You can to make a campfire there, put up a tent, and even park your car.

A car can be parked in one of six locations, which are also equipped with the so-called 'small infrastructure', i.e. tables with benches, shelters and litter bins. They are located along the roads inside the Park: Zakręt Raka, Rozgoźnica, Lake Ostrowieckie, the settlement Ostrowiec, Pustelnia, Gwiazda.

2 tourist information centres, located in Drawno and Głusk, can give You any further information.