Eastern Darłówko Bathing Area
Darłowo can be proud of a beautiful and large beach. The beach is divided by the Wieprza River, therefore we can say that there are two beaches in...
11-02-2015 ·

Turkusowe Lake
Turkusowe Lake was formed on the site of a former chalk pit. A Portland cement factory, founded by Johannes Quistorp in 1829, operated in the nearb...
01-04-2015 ·

“Gibbon” Ropes Course
The park offers 8 courses of different lengths and levels of difficulty, and two training courses. It is also possible to ride a Go-kart on a rope....
22-05-2015 ·

Chojna
Chojna is a large town. This communal town has an agricultural and resort character due to its location near a lake, rivers, and forests, among ara...
27-04-2015 ·

The Museum
The prototype of the Koszalin museum was the exhibition of the German Tourism and Protection of the Country Association opened in 1912 in the city...
20-05-2015 · 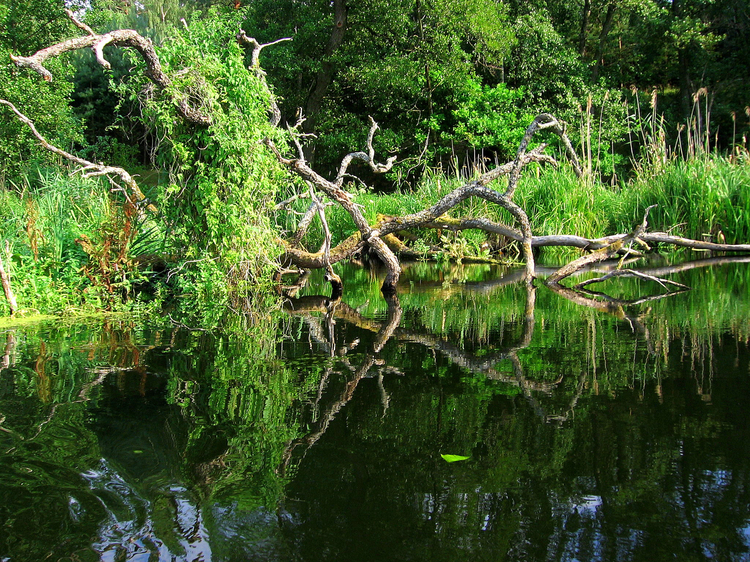 The Drawa River flows through the Counties of Choszczno and Drawsko. Its network spreads over the area of Drawsko Lake District, Drawsko Plain, Wałcz Lake District and Gorzów Valley. It starts somewhere around the settlement of Zdroje in the Ogrodno village and flows into the Noteć River near the town of Krzyż Wielkopolski.

The Drawa River is the right-bank tributary of the Noteć River. The total length of the river is 185.9 km and the area of its watershed is 3296.4 km2. The network of tributaries and outflows of the river along with a number of flow-through lakes on the river is extremely varied.

The source of the river is situated in the village of Zdroje in Połczyn-Zdrój Commune within the area of the Drawsko Landscape Park. The source lies at 200 m AMSL. 41 km of the river flow through the park. The river then flows through the reserve ‘5 jezior’ [5 lakes] up to the largest lake in the province – Drawsko Lake. Then, it winds as far as to Złocieniec and Drawsko Pomorskie. In the following stages it runs through Prostynia and the town of Drawno. Outside the town the river becomes the border between the Zachodniopomorskie [West Pomerania] Province and Lubuskie Province. It flows into the Noteć River near Krzyż Wielkopolski. The mouth lies at 30 m AMSL.

The quality of the water in the river is classified as class III. There are two hydroelectric power stations on the river: in Borowo and in Głusko, which were founded as early as in the nineteenth century. Outside Drawsko Pomorskie there is one more power station called Młynowo, which is smaller and younger than the other two.

The Drawa is special also due to its flora. Along its banks and among common plant species of river banks there are many protected species which are rare in other regions. This is why the Drawa National Park was founded on the area around the river. Its aim is to protect these rare species along with broadleaved forests, beech woods and riparian forests which prevail on the forest sections of the river.

Since the course of the river is so diversified, there are also different fish species living in its waters. There are sections with populations of the following species: trout, common bream, barbel, grayling. In total, there are more than 30 fish species present in the river. Throughout the entire length of the river there are populations of perch, common roach, chub, burbot. The species which are rarer include trout and grayling. The latter one is characterized by the above-average size it grows to in the Drawa waters. It all makes the river popular among anglers.

The Drawa River is a paradise for kayaking enthusiasts. The route along the river is called Srebrny Szlak Kajakowy Drawy im. Karola Wojtyły [the Karol Wojtyła Silver Kayaking Route of the Drawa] to honour the pope who used to go on kayaking trips in the region himself. The route is 173 km long and it is estimated that it takes 8 to 10 days to complete it. Along the route there are many interesting objects, from a number of bridges to the closed mill (at Krosino Lake) and forester’s lodges on camping sites.

One should remember that part of the river flows through the area of a military training area, from Dąbie Wielkie Lake to the Borowo hydroelectric power station. Kayaking along this section is strictly forbidden.