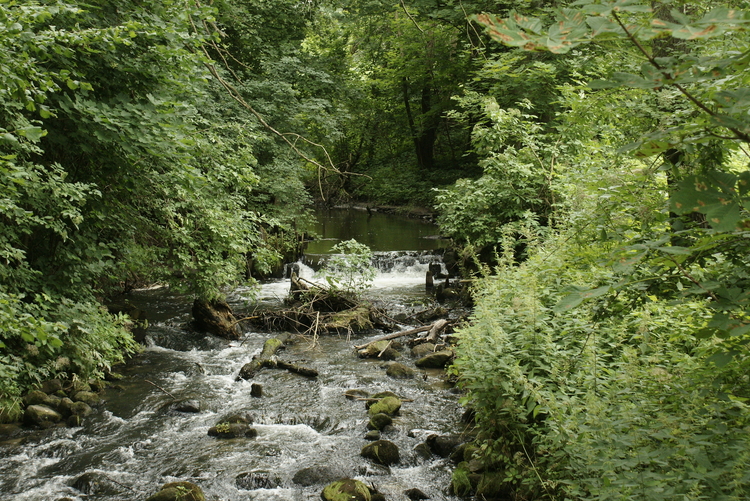 Płonia River has its sources north-east from Barlinek, within the Barlinek-Gorzów Landscape Park and it finishes in Dąbie Lake in Szczecin. It is included in Natura 2000 of Płonia Valley and Miedwie Lake, as well as it is a right tributary of the Oder River. The total length of the river is approx. 74 km (of which approx. 30 km flows through Pyrzyce country), which makes it the largest river of the Zachodniopomorskie Province.

The direction of the river course changes – first from the north to north-west. It constitutes a border of the Pyrzyce and Stargard counties. It falls into Płoń Lake, and the part – 5 km long – from the lake to Miedwie Lake is called Płoń Canal due to the regulation of the riverbed. It flows through Bukowa Primeval Forest and Goleniów Plain, and then it finishes its course falling into Dąbie Lake in the south-east part of Szczecin, defining the border of the city (for 3.5 km).

Płonia is a river with a high class of cleanliness. It has a peaceful current and practically transparent water surface which makes it possible to admire different species of fish and plants. At the sand and silt bottom there are numerous waving water grasses. The slopes of the coast are relatively high (90 cm) and wooded. The uniqueness and gentleness of the river is caused by the number of lakes on its course. Thanks to the lakes the river rises in spring and it is not very low in summer, maintaining a rather constant coast line. Considering its natural and landscape advantages, it is compared to Drawa, one of the most beautiful kayak tracks in Europe and it actually has a lot in common with it – e.g. the amount of lakes on its course (it is enough to mention Miedwie Lake into which Płonia River falls, which is considered to be one of the largest lakes in Poland).

There is also a 65 km long kayak track on Płonia River, which starts in Niepołock (a bridge on the road from Barlinek to Płoń Lake). It is a rather easy track, however you need to be ready to carry your kayak in some fragments of the track (especially when the river flow is lower). The entire track takes approximately 6 days, however in the case of more experienced canoeists it should take not more than 3 days. Unfortunately the campsite infrastructure is rather poor which limits the possibility to organize larger events. It is worth staying in Kołbacz in order to visit Cistercian buildings. The contribution of the order to the history of the river should be mentioned here, as Cistercians moved to Kołbacz in the 12th century and for approximately 200 years they banked up the river which made the soil very fertile, as it was fertilized with river sludge. Later the river was dug through which decreased the lower part of the riverbed.

Many people appreciate peace and silence, as in the surrounding of the river you can only hear rustling reeds and the surrounding birds singing. In the waters of Płonia fishermen can catch various species of fish, especially in its lower course (below Miedwie Lake), such as eel, hub, pike, ide, whitefish, brown trout, as well as catfish and strictly protected sabanejewia aurata.

More on the topic:
Weather
Geolocation
Search nearby
Płonia River
COMMENTS
Sign in to leave a comment.