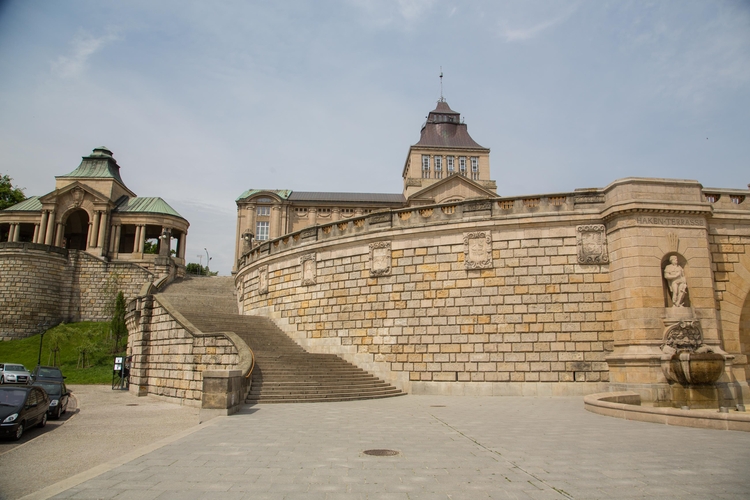 Wały Chrobrego (formerly Hakenterrasse) were built in place of the former Leopold’s Fort, which was torn down in the second half of the 19th century. The decision about building the decks was made at the beginning of the 20th century, thanks to the efforts of the then supreme burgomaster Hermann Haken. The design of the object was prepared by the most famous architect of Szczecin – Wilhelm Meyer-Schwartau. The decks are 500 meter long and rise up 19 meters over the Oder River. From there, we can see the Grodzka, Bielawa, and Łasztownia islands, the right bank of the Oder River, its canals and arms.

In the years 1902-1907, pavilions on the decks as well as stairs were built. The walls were embellished with plaques presenting motifs of marine fauna and flora, and coats of arms of Szczecin and seaside towns. At the top of the decks, there was a strolling path planted with trees was created, in the central part of the decks, somewhat lower, a semicircular pedestal was built, in middle of which a sculpture depicting a struggle between a man and a centaur, made by Ludwig Manzel, was placed. Lower, there is a wide fountain, in front of which two lighting towers styled to look as lighthouses.

The next stage of the works upon the decks was the construction of representative public utility buildings on the top of the decks. In the central part, a building of a city museum was erected in the years 1908-1911, also according to the design by Wilhelm Meyer-Schwartau. The official opening of the building took place on June 23rd, 1913. There were plans of extending it towards a park located behind the building, but due to the outbreak of the Great War and a crisis in Germany that followed the war it has never been finished. Currently, the building houses the National Museum in Szczecin and a stage of the Contemporary Theatre.

To the right of the museum, a building of the office of the then Szczecin administrative region was built according to the design by Paul Kieschke. Currently the West Pomerania Province Office is located in this building. It was erected in the years 1906-1912. To the left of the museum, there are two buildings: the seat of Social Insurance Company erected in the years 1902-1905, according to the design by Emil Drews and the seat of the General Customs Directorate started by Hinckledeyn and finished at the latest, in the years 1918-1921, by Osterwold. Today, both buildings are joined together in a one complex where the Maritime University of Szczecin is located.

The decks survived the war without major damages. After 1945, Polish names superseded German ones, a restaurant was established in the basement of the north pavilion, and buildings of two restaurants were erected at the ends of the alley. After 1989, the elevation of the decks, the buildings of the National Museum and the West Pomerania Province Office, as well as the elevation of the “lighthouses” were cleaned. Also, a plaque with a dedication for the supreme burgomaster Hermann Haken was restored.

The whole arrangement is one of the most interesting urban complexes from the beginning of the 20th century in this part of Europe. Moreover, Wały Chrobrego is a place in Szczecin that is probably the most popular in Poland. It has been entered into the provincial register of historical monuments in December 1996.