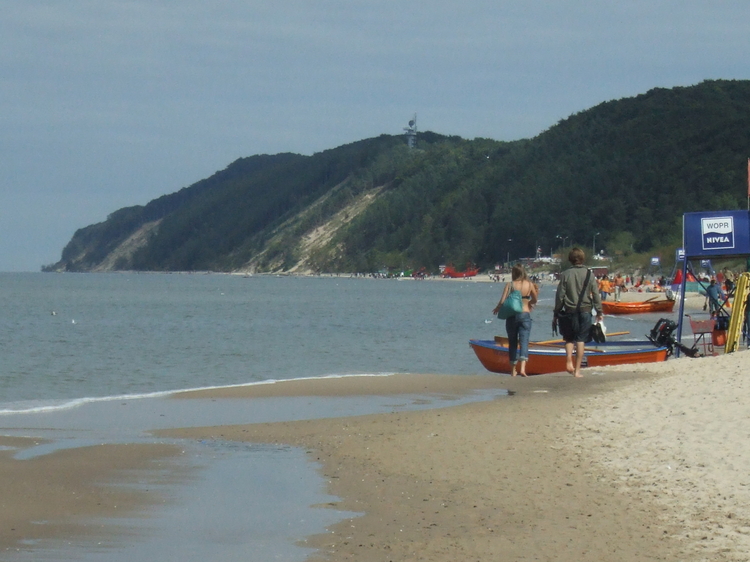 Gosań is the name of a hill situated on Wolin Island, within the area of Wolin National Park. It lies at a distance of around 4 km north-east of Międzyzdroje. When following road no. 120 from Międzyzdroje to Dziwnów, watch carefully for a signpost indicating the way to the observation point. In the vicinity there is an unsupervised car park. In the summertime you will be charged a parking fee. On the other side of the street there is a marked trail which leads to the top of the hill.

Gosań is the highest hill on the Polish coast (93.4 m AMSL) situated directly by the sea. The top can be reached by a 300 m long trail which runs through a beech forest. The observation point offers a view over the Baltic Sea and the Bay of Pomerania. On the left there are outlines of the towns of Międzyzdroje and Świnoujście, and if the weather is fine, you may be able to see the German town of Ahlbeck. On the right and straight ahead there is nothing more but a boundless sea. In addition, you will see the precipitous cliffs overgrown with beech and pine woods, and a wreck of a German concrete ship on the bottom of the Baltic Sea. The ship went down in 1945 during the air raid of allies on Świnoujście. There is also an observation tower and a bunker on top of Gosań.

The hill of Gosań is an interesting example of a heap cliff. The sandy and gravel slope is washed over by the waves. In addition, the slope is dried by the wind. Another destructive power is the meteoric water which flows down the slope. It all makes the cliff undergo constant changes which lead to abrasion. It is estimated that the sea devours one metre of land every year. The sand and gravel falling down the slope form heap cones. The sea washes away the small remains of the heap. As a result, there are only larger stones at the foot of the cliff.