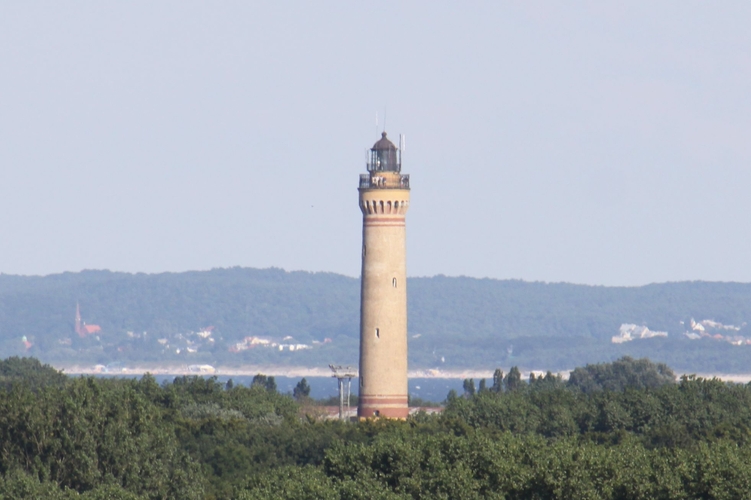 The lighthouse is located in the district of Warszów (the eastern part of the town), on the Wolin Island, on 1 Bunkrowa Street, near the sea mouth. In order to reach the lighthouse, tourists have to use a ferry. To the lighthouse leads a winding road, which surrounds the port.

The lighthouse was built in 1857. The construction of the lighthouse started in 1854 and lasted until 1857. On December 1st, 1857, the lighthouse emitted light for the first time. It is the building from facing brick, 69 metres tall. To the top of the lighthouse leads a flight of more than 300 steps. It is one of the tallest lighthouses in Poland and along the Baltic seashore. The tower offers a view of the port, wooded coast in Międzyzdroje, and health resorts on the Uznam Island. The lighthouse emits the light that can be seen from 46 km. Since 1958, it has also emitted a Morse alphabet radio signal. Nowadays, the lighthouse emits red light as well. Currently, the lighthouse is under the supervision of the Maritime Office in Szczecin. In the years 1998-2000, it underwent a comprehensive renovation, and the building was not available tourists until 2000. Next to the lighthouse, there is the Museum of Lighthouse and Sea Rescue. It was established in buildings that used to be inhabited by lighthouse keepers. The visitors of the museum can see navigation equipment. Some exhibits can also be seen outdoors, such as old boats and anchors.