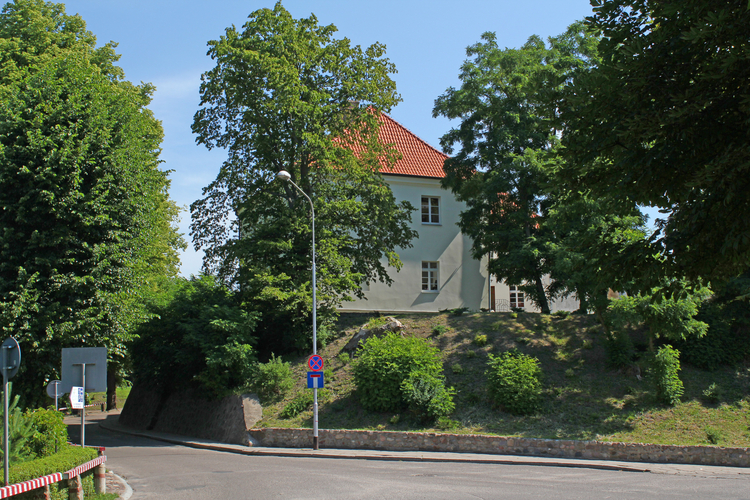 The Castle in Połczyn-Zdrój is located in the centre of the town, near the Old Town (current Plac Wolności [Liberty Square]).

It dates back to the turn of the 13th and the 14th centuries. It was erected in the vicinity of the old town, on a small hill - at the duke Bogislaw IV’s behest. The founders wanted it to protect the southern border of the Griffins’ land from the continuous expansion of Brandenburg to the southern-west. Later, the castle was ruled by the von Wedel family. In 1374, the von Manteuffel family went into the possession of the castle. It is not known how the castle looked originally, it is known, however, that it had been rebuilt multiple times. It was first rebuilt after the fire which took place in 1500. The works were conducted by Kurt von Manteuffel. It is assumed, that at that time, not only the buildings on the plan of a polygon, but also a masonry defence tower were built. In 1654, the castle was taken over by the von Krock family. Then, the next rebuilding was carried out. In the years between 1770 and 1772, Anthony von Krockow gave up the defensive function of the castle, and he transformed it into a Baroque palace, whose shape reminded the present one. In the middle of the 19th century, the palace was bought by the local authorities. A post office was opened in the palace. Later, in the first half of the 19th century, it was occupied by nuns who ran children’s home there. After the World War II, the castle was transformed into residential units and it served this purpose until the 1960’s. The castle has lost the characteristic features of a fortress over the centuries. The only elements of its defensive functions which have been preserved are: the retaining wall surrounding the castle’s base from the west, the arched gate and the cobbled castle yard. Because the castle had been used for residential purposes for a long time and during that period it hadn’t been renovated, it started to fall into ruin. Then, a decision was made that, renovation works will be conducted. In 2012, the local government obtained EU funds to co-finance the complete renovation of the facility. At that time, stairs leading to the main entrance were rebuilt. The main purpose of the renovation works was to recreate the look of this part of the building, which had been captured in photos from the turn of the 19th and 20th centuries. These days, the castle plays function of a cultural institution. The building consists of two wings located on an “L”-like plan. Julian Tuwim’s Public Library has been arranged in the castle. Moreover, on the ground floor, visitors will find the Zamkowa Galeria Różności [Castle’s Gallery of Varieties], where local, hand-made products created by the local artists can be purchased. The most representative place in the castle is the fireplace room [sala kominkowa] where different kinds of exhibitions are held. In front of the entrance to the fireplace room, there is a permanent display which contains objects connected with the history of Połczyn-Zdrój. The library offers free Internet.