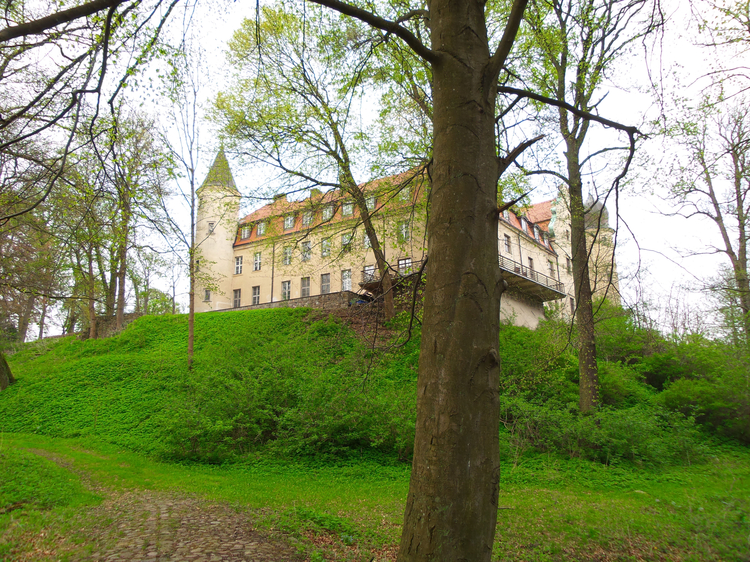 The caste is located on a small hill between Tuczno Lake, Zamkowe [Castle] Lake and Liptowskie Lake, on the southern periphery of Tuczno, near the driveway to the road No. 177 from Człopa to Tuczno.

The castle is one of the biggest tourist attractions in Tuczno Municipality and the Wałcz District. It has been built in the place of the former Pomeranian stronghold, location of which was perfect for defensive purposes. In  1338, Ludwig and  Lamprecht von Wedel started to build a masonry castle. At that time, it was a Gothic structure made of bricks and stones, on a plan of a 28 x 35 x 36 x 39-m trapezium. The castle yard was surrounded from three sides by a 7-m high, brick wall. In the northern part of the wall there was a gateway.

The castle was one of the most important strategic points on the border between Brandenburg and Wałcz Land. The emperor Carol IV, himself, in 1375  considered the castle to be one of the 12 strongest castles east of the Oder River.

In 1365, the Wedel family paid homage to the Polish King. From that moment on, their armies and their castle were at his disposal. To strengthen its defensive position, in 1400, the castle was surrounded from three sides with a moat, 25 meters-wide. In the 15th century, the castle  besieged sieged several times during the battles with the Teutonic Order. It managed to defend itself, but on the 13 September 1409, the Wedel family had to give in. For the next two years, the castle belonged to the Teutonic Order. They stayed there until 1411, later they won it again in 1436 and in 1458. Later, the castle burned down. After signing of the Second Peace of Thorn in 1466, Tuczno became the part of Poland again. In 1542, Stanislaw I Wedel-Tuczyński decided that a new building will be erected to replace the main residential building. Construction works lasted until 1581. Between 1608 and 1631, under the rule of Christopher II Wedel-Tuczyński, the castellan of Poznań, two new wings, northern and western, were created.  The former fortified building started to resemble a Baroque palace. After the death of the last members of the Wedel-Tuczyński family: Andrew II and Marianna, in 1739, the castle had changed owners several times. It belonged to the following families the Mycielski family, the Niemojewki family, the Poniński family, the Moszczeński family. During that period, the condition of the castle deteriorated. In 1846, a new western wing and north-western tower were built on the old foundations, and the two remaining wings were restored. In 1903, the castle was partially renovated so that it could serve as Caritas hospital.

Between 1934 and 1937 in the southern part of the hill, reinforced concrete bunkers were created, and the castle was incorporated into the line of Pomeranian Wall’s fortifications.

As a result of the war, and the fact that the bunkers were blown out in 1945, the castle had been partially damaged. The fire in 1947 completed the destruction. In 1957 debris started to be cleared away and the protection of the castle started. In years between 1959 and 1962, an archaeological survey was carried out to prepare it for reconstruction works. The results of the survey helped to uncover the fragments of the original Gothic castle. Between 1966 and 1977, renovation and reconstruction works were conducted. It was decided that the castle should regain its Renaissance-Baroque style from the beginning of the 18th century, therefore many elements which were added after that period, e.g. adapted buildings and outbuildings, were dismantled. Since 1976 the castle offered space for: a conference centre, hotel, a restaurant and for Dom Pracy Twórczej Stowarzyszenia Architektów Polskich [Home of Artistic Creativeness of the Polish Architects Society]. Currently, the castle is also used as conference centre and a hotel.

The oldest part of the castle, which comes from around 1338, is a part of the eastern wing. A fragment of wall in Gothic bond has been preserved from that period, as well as the gothic brick basements with barrel vaulting – they are all open for public. Two-storey, Late-Renaissance building, with round fortified towers in the eastern corners, was erected on the foundations and basements of the oldest part of the castle. The façade was ornamented with window surroundings in sandstone and scraffito. In 1846, these decorative elements were destroyed, but later between 1966 and 1976 they were reconstructed on the basis of the preserved elements. The western wing, dating back to the end of the 15th century, was disassembled in the period between 1608 and 1631, and replaced with a new, Baroque construction. In its north-western corner, a round fortified tower was erected. In 1846, the wing was demolished again, and a building with a crow-stepped gable was built on its foundations. The fortified tower was equipped with a new storey. After, the reconstruction works, the western wing regained its appearance from the 17th century.

It is of no surprise, in case of such an old building, that according to a legend, the castle in Tuczno is haunted by ghosts. People say, that sometimes a white lady or a squire clad in hunting clothes appear near the castle. Sometimes both lovers can be met.

It is assumed that the lovers’ drama began in the 16th century (however, some stories say that it was one hundred years before). One member of the Wedel-Tuczyński family married a beautiful lady from a respected family from Wielkopolska. Their marriage, however, turned out not to be happy. Arguments and quarrels were common, and soon both spouses lived separate lives without paying attention to each other. Lady Tuczyńska was the happiest when her husband left the castle for long periods. While he was away, she would regain the joy of life, she was cheerful and happy, the world seemed a better place for her, and people felt more friendly. During one of castellan’s long absences, she decided that she wanted to learn how to hunt with a falcon. A young squire, who looked after the falcon, was fascinated with her. After a few days, they discovered that they both really enjoyed each other’s company. Their affair flourished. When castellan Tuczyński came back, he was busy with hunting, riding a horse, visiting neighbours, so he did not pay attention to what his wife was doing. The young falconer assisted the lady every time she would go for a walk or for hunting.

One day, almost the whole court went hunting. The lady, decided to hunt with a crossbow. She wanted to hunt garganey, but the birds kept hiding in the bush. Despite this fact, the lady kept shooting the arrows because she found it amusing to point to the target hiding behind branches. Suddenly, she heard a loud scream of agony pain – it was the squire, who wanted to scare the birds so that they would come out of the bush. Tuczyńska ran to help her lover, but it was too late. Before he died, the last thing he said was – “My lady, my love will not die with me…”

The woman, who shot her lover, was in a great despair. She locked herself in the tower and she would never leave it again. After a few days, servants found her dead. Whether she died of despair or poisoned herself, remained a secret. Her body was laid in the tomb of the Tuczyński family.

After her death, strange things started to happen in the castle: people heard a rattling noise of the spinning wheel coming from the lady’s chamber. Some people said that they saw a woman clad in white, walking on the castle’s yard, or twinkling lights in the windows of the tower. The squire was also seen, as he was waiting with a falcon for his lady. Sometimes, during the full moon, it is possible to see them both, holding their hands and looking into each other’s eyes. The rumour has it, that the couple was seen only a few years ago…

Geolocation
Search nearby
Zamek Wedlów-Tuczyńskich [The Castle of the Wedel family from Tuczno]
COMMENTS
Sign in to leave a comment.