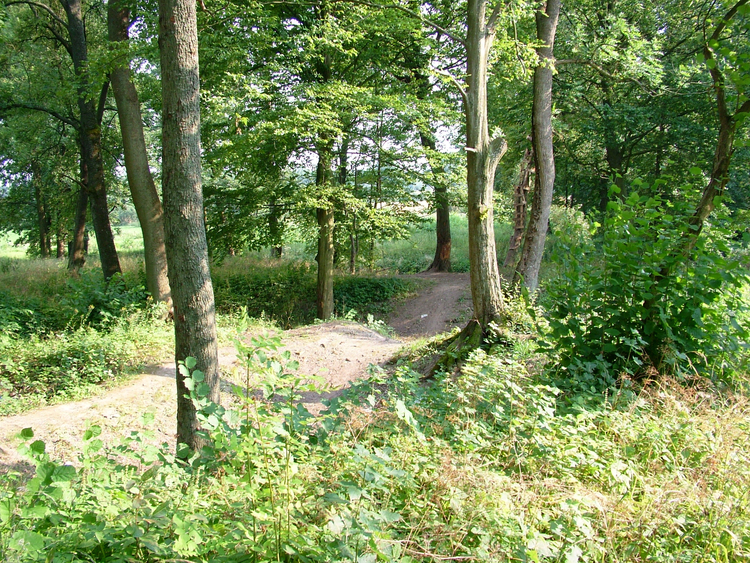 The castle ward in Mirosławiec is located within a vast green area of the former castle park in the eastern part of the town, at the junction of Zamkowa and Krótka Streets.

Polish word “majdan” (ward) comes from Turkish language and means a square, in this instance – a yard within a castle. It is a place where the castle of Mirosławiec, later rebuilt as a baroque palace, was located. It takes a form of a square-shaped island with 84 m long sides, surrounded by a 10 m wide moat with a supply channel and an outflow channel. The spatial arrangement of the castle ward is symmetrical along the east-west composition axis, which is slightly (about 150) leaned southwards. On the western side, the axis corresponds to Zamkowa Street; on the eastern side, the axis ends about 1,100 m further with a family vault on the hill of Góra Piaskowa. The island, elevated by about 5 metres within the foundations of the palace, can be accessed from Zamkowa Street by a bridge over the moat.  Nowadays, only the remnants of the foundations are visible, but they are worth visiting, because the history of the castle is very interesting.

The first castle in the town, built as a defensive stronghold by Hasso von Wedel, burnt down in the fire of Mirosławiec in 1719 along with the majority of buildings. The construction of a new castle was a decision of Count Dionizy Jerzy Joachim von Blankenburg, the then proprietor of the town, who later became a colonel in the Prussian army. Was it for the desire to protect the new building from another fire or was it for Dionizy’s daring, of which he was famous, the location of the new castle was unusual and surely difficult for constructors – it was a wet, even boggy area. As a known specialist in difficult bricklaying challenges, master Gotfryd Mercker was hired. On February 10th, 1731, preparations for the construction were started – earth was being brought in and poured out to the marsh for many days, then a 4 metre deep and 20 metre wide entrenchment was dug out, which marked out a rectangle with sides of about 60-80 metres. For two weeks, local peasants were bringing tree trunks from the woods and the burghers of Mirosławiec were forced to hew them to obtain pales, which then they had to drive in into the boggy ground.  The bricks used for the construction of the castle were brought from the nearby village of Hanki. In 1738, the castle was ready to be inhabited, but a wife of Count Dionizy found it too modest, so in the years 1743-1745 two wings were added to the building. The castle was ready – this time it did not have any defensive nature like the former building, but it was rather a residence of the nobility. The building, made of brick and stone, had two storeys and a basement. It was built in the Dutch baroque style with the dimensions of approximately 20 by 40 metres with a 32 metre tall tower. The castle was surrounded by a 5 metre wide artificial moat. Behind the castle, there were vast park areas, but the magnificent plan of developing the park, prepared for the family of Blankenburg have never been implemented. The castle was, however, lavishly decorated – the tapestries that ornamented the walls of the castle’s chambers were well-known not only in the nearest neighbourhood. The heyday of the castle passed very quickly, though.  The last representative of the family – the lord of the castle and its surroundings – Count D.J.C. von Blankenburg – died in 1836. Since 1877, the castle has not been inhabited and has gradually fallen in disrepair, until it was finally destroyed in a fire of 1890.

More info: www.miroslawiec.pl
More on the topic:
Geolocation
Search nearby
The castle ward
COMMENTS
Sign in to leave a comment.