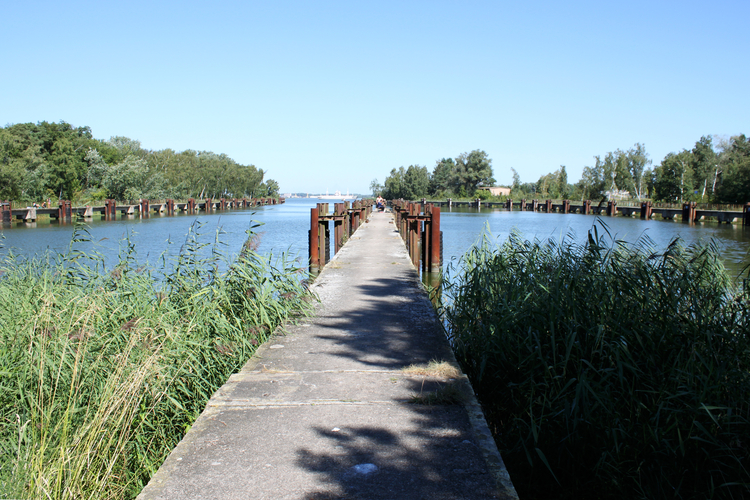 The U-Boot Dock is located south of Świnoujście, at the confluence of the Stara Świna and Świna River (the Piastowski Canal), on the Karsibór island. The road to the town of Karsibór branches off road no 93. The dock can be seen on the left side of the road, just after crossing the only bridge leading to the island. A forest, unmarked car park is also situated to the left of the road, past a sign that informs about the fact of entering the town.

The base of German submarines (U-Boots) was established in 1942, in the place of the former ferry harbour. A ferry from the Uznam island to the Karsibór island plied since 1881. When the German navy took over the area, it was completely rearranged. The entrance to the dock was placed from the Stara Świna River. The harbour, from its beginnings, served as a base for training and auxiliary ships. The vessels that moored in the harbour included the U-Boots of the 4th Training Flotilla from Szczecin, the armed KFK cutters from the KFK-Schulflottille, and training torpedo boats (S-Boots). In 1945, there were the AFP artillery ferries from the 8th Flotilla in the base. In 1944, the base on the Karsibór island was complemented with a barracks complex for the navy cadets (Schnellboot-Lehr-Division). They had a practical training on board the torpedo boats and the KFK cutters. The base used the piers of the U-Boot dock. The last U-Boots were stationed in the base until the middle of April 1945. Nowadays, tourist can see a well-preserved mooring pier and quays surrounding the dock. Nearby the dock, there are also the ruins of a workshop hall and of barracks. At the end of a concrete platform, at the confluence of the Stara Świna and Świna River (the Piastowski Canal), there is a navigational sector light in the form of a small lantern painted red. Apart from the sector light, all buildings are freely available. Tourists should be particularly careful during the visit in the dock.

More on the topic:
Geolocation
Search nearby
The U-Boot Dock
COMMENTS
Sign in to leave a comment.